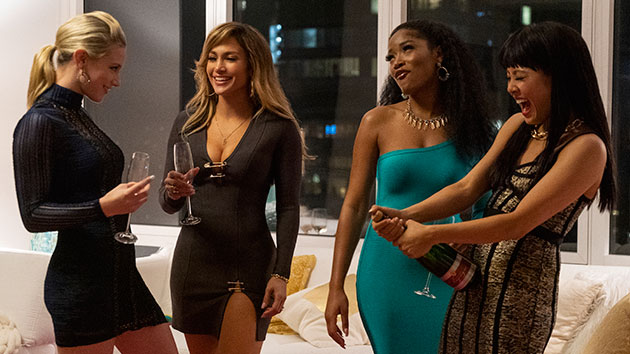 After chatting about the show, the conversation turned to the movie, which opens nationwide September 13.

“I’ll give you a little tease? J-Lo replied, before dropping about 45 seconds of the trailer.  The full trailer debuted online immediately after that.

Hustlers, which is inspired by a 2016 New York Times Magazine article, follows “a crew of saavy former strip club employees” who come together to “turn the tables on their Wall Street clients.”

“They stole from everybody. Hard working people lost everything and not one of these d********* go to jail,” Lopez says in a voice-over, while the ladies are seen swindling their high-profile clients as Cardi B, who also stars in the movie, raps underneath.

“The game is rigged and it does not award people who play by the rules. It’s like robbing a bank; except you get the keys,” adds Jennifer.

Mom dying of ovarian cancer shares what she wants women to know about the deadly disease
First ‘SNL’ guests of the season: Owen Wilson, Kim Kardashian West, Rami Malek, and Jason Sudeikis
Jada Pinkett Smith celebrates 50th birthday on ‘Red Table Talk’; ABC to adapt Baratunde Thurston’s ‘How to Be Black’
Nicole Richie sets hair on fire while blowing out birthday candles
Tonight on ABC: ‘The Wonder Years’
Is It Time To Go All-In On The Raiders?