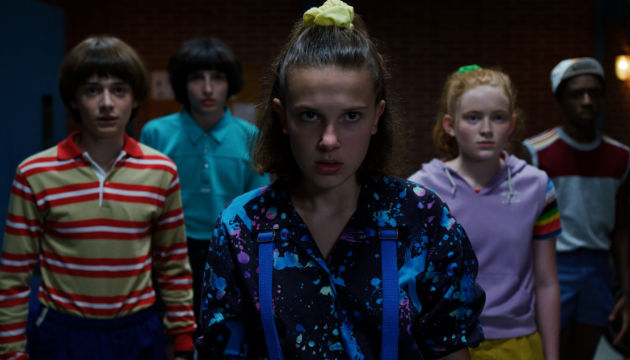 (NEW YORK) — Millions of fans of Netflix’s Stranger Things have already binged the show’s entire third season, which debuted July 4. In fact, the streaming giant claimed just days after its anticipated debut that some 40.7 million accounts had tuned in to watch the continuing adventures of Mike, Jane, Dustin, Lucas and Will.

Fans have watched the Upside Down gang grow up — along with their real-life alter egos Finn Wolfhard, Millie Bobby Brown, Gaten Matarazzo, Caleb McLaughlin, and Noah Schnapp — and so have their adult co-stars, like David Harbour, who plays Sheriff Jim Hopper.

And that, Harbour laughs, is “weird!”

“There’s no other way to say it!” he tells ABC Radio.

“You know, the first season we were all saving Will Byers…and Noah wasn’t even around that much,” Harbour explains. “The first season [had] Hopper…obsessed with this little tiny boy — and then you know we’re on set for season three and he towers over Winona [Ryder]…And now, [he’s] approaching my height. And that’s just silly.”Harbour adds that his young co-stars have grown up in unexpected ways.

“It’s almost like…you plant seeds in a garden and you think like, ‘Oh this seed is going to be this…"” he says. “And then you’re just wrong.” In a touch of life imitating art regarding his relationship with Millie Bobby Brown, Harbour notes, “I think that’s one thing that we sort of put into the show…for Hopper is that he’s watching his teenage adopted daughter grow up and become a woman and, you know, the joys of that.”

He continues, “And also the terrors of that as a father…you know, that that sort of struggle that I think all parents go through.”

Mississippi health officials warn some pregnant women have been denied COVID vaccine despite ongoing surge
Alaska once had the highest vaccination rate. Now it’s in a COVID-19 crisis.
Priyanka Chopra responds to growing criticism over ‘The Activist’: “The show got it wrong”
In theaters now: Gerard Butler and Frank Grillo in the “irreverent, explosive” ‘COPSHOP’
Jennifer Aniston says season 2 of ‘The Morning Show’ ﻿will tackle cancel culture
How COVID-19 hybrid immunity could be a potential pandemic game-changer