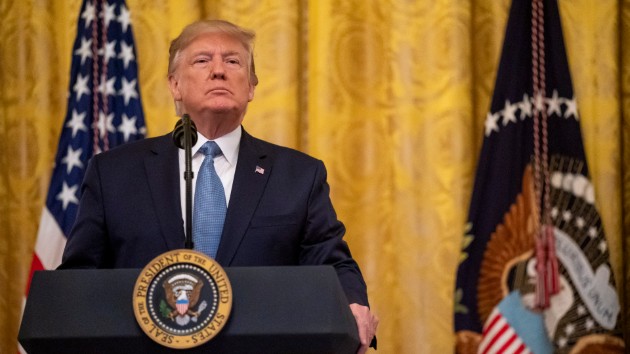 (WASHINGTON) — Rep. Al Green, D-Texas, introduced articles of impeachment against President Donald Trump on Tuesday evening, a move that could force the House to take up the controversial subject later this week over the opposition of Democratic leaders. Green, who has pushed to impeach Trump since 2017, and unsuccessfully pushed the House to vote on impeachment multiple times in the last session of Congress, introduced the measure after the House voted to condemn Trump’s Twitter attacks against four Democratic congresswomen of color. Nearly 60 Democrats backed an earlier version of Green’s measure in December 2017, which was successfully killed by Republican leaders at the time.The White House declined to comment.The Texas Democrat said the effort was prompted by Trump’s tweets over the weekend, as well as previous statements from the president about immigrants and in the wake of the violence in Charlottesville after a white supremacist rally in 2017.”I believe we must check him now or we might find somebody harmed,” Green said on MSNBC Tuesday evening.Trump, Green said Tuesday, reading from his impeachment resolution, “has, by his statements, brought the high office of the president of the United States in contempt, ridicule, disgrace and disrepute.”Because the resolution is privileged, Green could force a vote on the floor within two legislative days. Democratic leaders could decide to take up the articles of impeachment, table the measure indefinitely, or refer the matter to the House Judiciary Committee.The vote, something party leaders would like to avoid, would effectively force the House Democratic caucus on the record on impeachment, including dozens of moderate freshmen who would rather discuss the party’s agenda, and the unpopular and controversial topic of impeachment, before they return home for the August recess.House Speaker Nancy Pelosi told reporters it would be up to Democratic leadership to consider.Any vote would likely divide the caucus. While at least 86 House Democrats support launching impeachment proceedings against Trump, according to an ABC News analysis, Green’s effort is not based on the findings of special counsel Robert Mueller’s report — which Democrats have labored to highlight in a series of hearings and additional investigations.Many Democrats are also reluctant to consider the topic and go on the record ahead of Mueller’s testimony next week. Copyright © 2019, ABC Radio. All rights reserved.