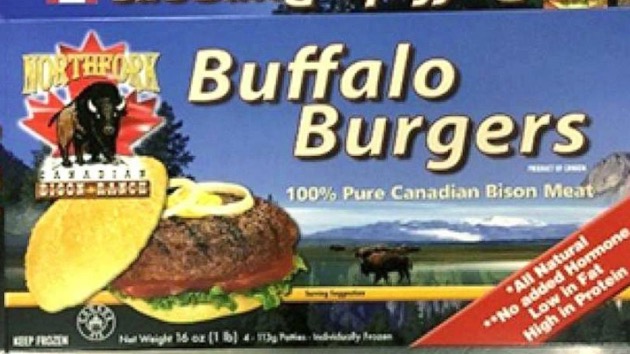 (ATLANTA) — Ground bison meat has been linked to an E. coli outbreak in seven states, according to the Centers for Disease Control and Prevention (CDC).Twenty-one people in Connecticut, Florida, Michigan, Missouri, New Jersey, New York and Pennsylvania have been infected with the E. coli O103 and O121 strains.Eight of those people were hospitalized, but no deaths or cases of hemolytic uremic syndrome, a type of kidney failure, have been reported.Interviews with the infected people determined that the source was likely meat produced on Feb. 22 and April 30 by Northfork Bison Distributions, Inc., in Quebec, Canada, which was recalled on Tuesday, according to a CDC food safety alert. Those who became sick reported eating bison at both restaurants and their home.

The recalled meat was sold to distributors as ground bison and bison patties, referred to as Bison Burgers or Buffalo Burgers. Recalled ground bison was also sold to retailers in 4-ounce burger patties.The CDC advised people who may have the recalled ground bison in their home to not consume it and throw it away or return it to the store for a refund.”Even if some of the recalled patties have been eaten and no one got sick, do not eat them,” the press release read.In addition, the CDC recommended that consumers wash and sanitize places where recalled ground bison products were stored, including counter tops and refrigerators drawers or shelves, and also suggested that diners should request that bison burgers be cooked to an internal temperature of 160 degrees when ordering at a restaurant.The CDC also also urged restaurants and retailers to check their freezers and storage for recalled products and to confirm with their suppliers that the ground bison they receive has not be recalled.Symptoms of an E. coli infection include severe stomach cramps, diarrhea and and vomiting that usually lasts five to seven days. The ailments typically begin three to four days after swallowing the Shiga toxin-producing E. coli germ.Those who experience symptoms should talk to their healthcare provider, write down what they are in the week prior to becoming sick, report their illness to the health department and assist public health investigators by answering questions about their illness. Copyright © 2019, ABC Radio. All rights reserved.