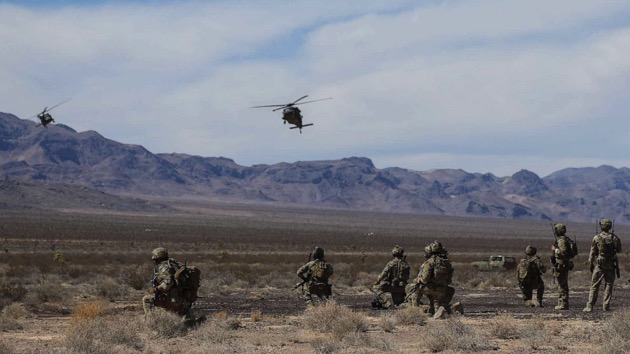 (LINCOLN COUNTY, Nev.) — The Air Force is warning people against storming Area 51 in Nevada, after a Facebook event page, organizing a meet up at the “Alien Center tourist attraction,” went viral.Conspiracy theorists believe that the U.S. government has kept UFOs and extraterrestrial life at the location, which is actually an Air Force training range.As of Wednesday morning, over 1.5 million people said they were “attending” the event, called “Storm Area 51, They Can’t Stop All of Us.” The event is scheduled for Sept. 20 at 3 a.m. Pacific Daylight Time. Another 1.1 million Facebook users indicated they were “interested.””We will all meet up at the Area 51 Alien Center tourist attraction and coordinate our entry,” according to the Facebook page. “If we naruto run, we can move faster than their bullets. Lets [sic] see them aliens.””Naruto” refers to the running style of the Japanese anime character, Naruto Ozumaki.”The United States Air Force is aware of the Facebook post,” Air Force spokesperson Laura McAndrews told ABC News in a statement. “The Nevada Test and Training Range is an area where the Air Force tests and trains combat aircraft. As a matter of practice, we do not discuss specific security measures, but any attempt to illegally access military installations or military training areas is dangerous.”The range is the largest contiguous air and ground space available for peacetime military operations in the free world, according to the Air Force, spanning 2.9 million acres of land and 5,000 square miles of airspace which is restricted from civilian air traffic.The range is also used by the Department of Energy for testing, research and development.

It’s unknown how many of the 1.5 million Facebook attendees would actually travel to the remote location in Nevada for the event, as the page has sparked Internet memes poking fun at the idea of storming the Air Force range for the opportunity to see aliens.The Air Force did investigate UFOs under Project Blue Book from 1947 to 1969, but the project was headquartered at Wright-Patterson Air Force Base in Ohio, not at the range in Nevada.

me and the boys on our way to sneak in Area 51 to save the aliens pic.twitter.com/1gfWjC6xHR

Project Blue Book concluded that none of the UFOs investigated were a threat to U.S. national security and there was “no evidence indicating that sightings categorized as ‘unidentified’ were extraterrestrial vehicles,” according to the Air Force.The project’s findings are available in the National Archives for public review.

He’s training to free the aliens at Area 51… pic.twitter.com/5oz1Q5rUZ6

Earlier this year, the Navy updated its guidelines for how its pilots report the sighting of “unauthorized and/or unidentified aircraft” due to an increase in the number of reports in recent years.”There have been a number of reports of unauthorized and/or unidentified aircraft entering various military-controlled ranges and designated air space in recent years,” Joseph Gradisher, spokesperson for Deputy Chief of Naval Operations for Information Warfare, told ABC News in May.

Me and my new pals when I bust them outta Area 51 👽👽👽#Area51 pic.twitter.com/cFJrq7ILHr

“For safety and security concerns, the Navy and the [U.S. Air Force] take these reports very seriously and investigate each and every report. As part of this effort, the Navy has updated and formalized the process by which reports of any such suspected incursions can be made to the cognizant authorities,” he said.Gradisher added that senior Naval intelligence officials and aviators “who reported hazards to aviation safety” have briefed congressional members and staff in response to requests for information.Copyright © 2019, ABC Radio. All rights reserved.

COVID-19 live updates: US reaches vaccine milestone
Arrest warrant issued for Brian Laundrie in Wyoming as search presses on: Live updates
Kids in Business at the DuBois Mall this Saturday
Place orders for Show Your Love dinner fundraiser for DuBois Continuum of Care
‘Goliath’ star Billy Bob Thornton on taking the reins as director for the final season premiere
“Will they kill me?” See Kristen Stewart as Princess Di in the final trailer for ‘Spencer’