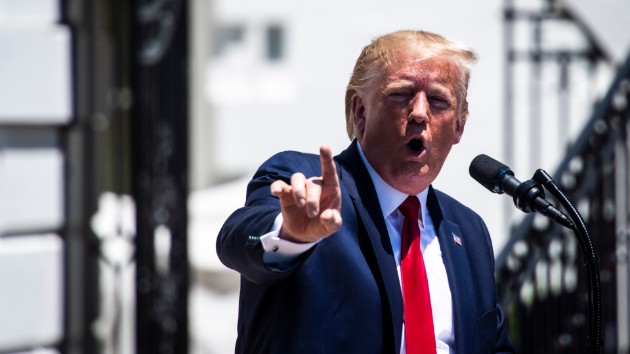 (WASHINGTON) — President Donald Trump is not backing down from his attacks on several female lawmakers as House Democrats call for his impeachment.“The Democrat Congresswomen have been spewing some of the most vile, hateful, and disgusting things ever said by a politician in the House or Senate, & yet they get a free pass and a big embrace from the Democrat Party. Horrible anti-Israel, anti-USA, pro-terrorist & public shouting of the F…word, among many other terrible things, and the petrified Dems run for the hills. Why isn’t the House voting to rebuke the filthy and hate laced things they have said? Because they are the Radical Left, and the Democrats are afraid to take them on. Sad,” Trump tweeted Tuesday morning.

He later added that his original tweets “were NOT Racist. I don’t have a racist bone in my body!”Trump has been criticizing the “squad” of freshman lawmakers — Reps. Alexandria Ocasio-Cortez, D-N.Y., Rashida Tlaib, D-Mich., Ayanna Pressley, D-Mass., and Ilhan Omar, D-Minn. — for what he characterized as “horrible and disgusting actions.” “When will the Radical Left Congresswomen apologize to our Country, the people of Israel and even to the Office of the President, for the foul language they have used, and the terrible things they have said. So many people are angry at them & their horrible & disgusting actions!” Trump said in a tweet.Omar appeared on MSNBC’s Rachel Maddow show Monday night, calling for the president’s impeachment and asserting that his agenda “is the agenda of white nationalists.” “We are suggesting he committed high crimes and misdemeanors and it’s about time we start the process and impeach this president,” Omar said. Trump’s attacks on the freshman lawmakers of color have sparked intense debate with critics referring to them as xenophobic and racist.Democratic Rep. Al Green announced Monday at a press conference that he plans to introduce articles of impeachment this month due to Trump’s “bigotry.” “This is not about the Mueller report,” he said. “This is not about obstruction. We can impeach this president for his bigotry in policy that is harming our society.””This is about the president’s statement that they should go back,” Green added. “That statement in and of itself is a racist, bigoted statement.” A Pew Research poll from April found that 56% of Americans polled believe Trump has made race relations in the U.S. worse. Copyright © 2019, ABC Radio. All rights reserved.