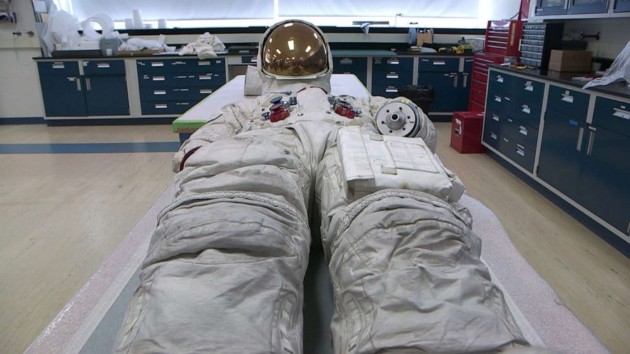 (WASHINGTON) — Exactly 50 years since the launch of Apollo 11, the spacesuit astronaut Neil Armstrong wore during his ‘giant leap for mankind’ went on display Tuesday morning for the first time in over a decade. The suit, with lunar dust still embedded in the fabric, was revealed alongside Vice President Mike Pence and members of Armstrong’s family at the Smithsonian National Air and Space Museum in Washington. “It is the single most human factor of the Apollo 11 mission,” said Lisa Young, objects conservator at the Smithsonian National Air and Space Museum. “It’s like a small, tiny spacecraft that kept the astronauts alive.” Young has worked on Armstrong’s Apollo 11 suit for over two years preparing it for its grand debut. Since 2015, the Smithsonian has raised more than $700,000 through a ‘Reboot the Suit’ campaign to “conserve, digitize, and display” Armstrong’s suit after it was placed in storage in 2006 to minimize signs of aging.”It’s really humbling,” Young said. “It’s really a privilege to work on the space suits.” The goal was not to make the suit look perfect, but as it was 50 years ago when it was on the moon. The flags on the shoulder of the Apollo 11 suits appear worn with marks, but the marks were there before liftoff due to a printing problem. “Every little stitch, every little piece of land or dust, every marking tells a story and we want to make sure that those stories remain with the suit as long as we have the artifact in our collection,” Young said. The suit was designed by the International Latex Corporation in Dover, Delaware (ILC), best known for making consumer products such as Playtex bras and girdles.”He could live, work, eat, drink, survive in the spacecraft space suit all the way back to earth and really tells the story of Apollo 11 and his job he did on the lunar surface,” Young said of Armstrong.

The pressure suit is comprised of 21 layers, each one hand-built by seamstresses.

“Some of the seamstresses I’ve talked to are just still in amazement that they can come see their work 50 years later and that people are interested in it,” Young said.

The suit will temporarily be on display near the 1903 Wright Flyer until the museum’s “Destination Moon” exhibition is completed in 2022. “I love to see people’s reactions,” Young said. “It’s very emotional.”

The push for electric vehicles may be killing sedans for good: Experts
Culture thrives in America’s most Hispanic, Latino state: New Mexico
Iowa Republican Sen. Chuck Grassley, 88, running for reelection
Harris interview with ‘The View’ delayed after co-hosts test positive for COVID-19
Generational wealth implications: Black and Latino-owned homes are more likely to be undervalued
Nick Cannon teases possibility of having more children: “My therapist says I should be celibate”