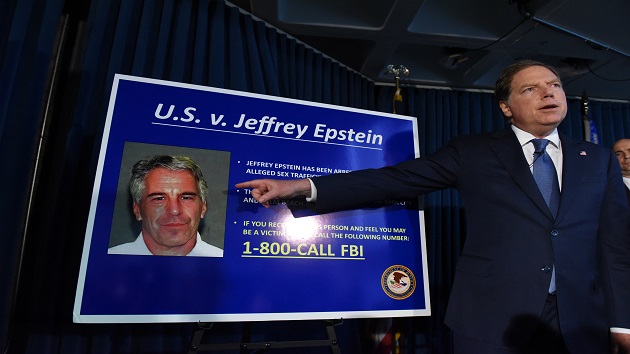 (NEW YORK) — Wealthy financier and convicted sex offender Jeffrey Epstein continued to have visits from young women that allegedly resulted in sexual liaisons while he was in ‘jail’ in Florida, a lawyer for one of his accusers said Tuesday.Attorney Brad Edwards, who represents Epstein accuser Courtney Wild and several other alleged victims, claims that Epstein’s 13-month jail sentence — the result of a plea bargain with federal prosecutors in Florida — failed to prevent the money manager accused of sexually assaulting numerous underage girls from having “improper sexual contact” with young women.At a Tuesday press conference in New York, Edwards said that a recent newspaper article — citing a Palm Beach County sheriff’s deputy — described Epstein as a “model prisoner” during his jail term in West Palm Beach in 2008 after he pleaded guilty to soliciting prostitution in a deal with federal prosecutors that was kept hidden Epstein’s alleged victims.Despite being a registered sex offender, Epstein was allowed by the Palm Beach County Sheriff’s Office to participate in a work-release program that permitted him to spend up to 16 hours a day, six days a week at an office in West Palm Beach that housed his non-profit organization, the Florida Science Foundation.”Most of the time was spent in an office, a private office that was adjacent to his lawyer’s office all day every day,” Edwards contended at the press conference. “And what you’re going to learn is he was not sitting there conducting some scientific research for the betterment of the community, but he was having office visitors, some who were flown to him from New York and continuing to engage in similar conduct, literally while he was in ‘jail."”Edwards said he does not know the exact ages of the visitors, but that he knows of none that were under the age of 18.”I do know that he was able to have visitors that were under the age of 21…,” Edwards said.He said he had interviewed one young woman who “personally visited” Epstein at his work-release office.”It was not for some business arrangement and it was for, if you’re in jail, improper sexual conduct,” said Edwards, who declined to identify the woman.Federal prosecutors have yet to comment on the allegations alleged by Edwards.Epstein, 66 — who at one time socialized with former President Bill Clinton, Great Britain’s Prince Andrew, and President Donald Trump — was arrested on July 6 for alleged sex trafficking of minor girls in Florida and New York. Some of the charges date back to the early 2000s.A team of law enforcement officers from the Federal Bureau of Investigation (FBI) and the New York Police Department (NYPD) took Epstein into custody at the Teterboro Airport in Bergen County, New Jersey, after he returned to the United States by private jet from France, sources told ABC News. Authorities also raided Epstein’s New York City mansion and seized evidence.Since his arrest, Epstein has been held in custody without bail. Federal prosecutors have asked a judge to keep him in jail as his case proceeds because they suspect he is a flight risk. Epstein’s attorneys argue that he is entitled to bail.Edwards’ client, Wild, and one other accuser, Annie Farmer, testified at Monday’s detention hearing in Manhattan federal court. Both women spoke in support of keeping Epstein locked up without bail.Farmer said she was 16 when Epstein had her sent to New Mexico where he was “inappropriate” with her. Wild told the judge she was 14 when Epstein sexually abused her in Palm Beach, Florida.Epstein appeared to watch them address the judge but his face showed no emotion.U.S. District Court Judge Richard Berman said he will decide on Thursday whether to grant Epstein’s release or, as pre-trial services recommended, keep him jailed.During Tuesday’s news conference in New York, Wild read a statement asking other alleged victims to come forward.”If you have already made the decision to come forward, thank you. If you have not, the time is now,” Wild said. “To every victim out there I understand what you are going through. You may feel scared, or have feelings of shame and guilt, or feel alone. You may try to convince yourself that this was a long time ago and you have moved on. But you are not alone and this was not your fault.”If you are a victim of Jeffrey Epstein, then you know what I know, that he will never stop sexually abusing children until he is in jail,” Wild said. “We will not get justice unless you speak out.”Wild, identified in court documents as “Jane Doe 1,” sued the Department of Justice in 2008, alleging that a non-prosecution agreement reached with Epstein by federal prosecutors in South Florida was hatched in violation of the Crime Victims’ Rights Act, which enumerates the rights afforded to victims in federal criminal cases, including the right “to reasonable, accurate, and timely notice of any public court proceeding, or any parole proceeding, involving the crime or of any release or escape of the accused.”In February of this year, U.S. District Court Judge Kenneth Marra ruled in favor of Wild and other Epstein accusers, finding that the federal government failed to confer with the victims in advance of the deal. Marra is now considering the possible remedies for the violation, which could potentially include tearing up the non-prosecutions agreementCopyright © 2019, ABC Radio. All rights reserved.