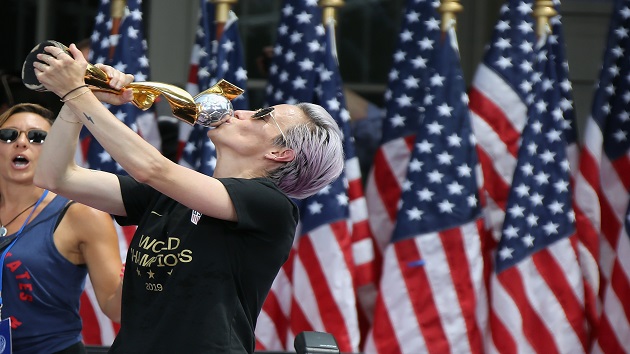 (NEW YORK) — The U.S. Women’s National Team (USWNT) delivered a history-making performance at this year’s World Cup, and now we know more about a new training tool that helped the soccer stars dominate.USWNT coaches for the first time in the team’s World Cup history tracked players’ menstrual cycles and symptoms and instituted practices to help players perform their best.”I feel like it’s one of many strategies that we deployed that helped us win,” Dawn Scott, high performance coach for both the USWNT and the National Women’s Soccer League (NWSL), told “Good Morning America.” “I feel like [the U.S. is] leading the way on this.”Scott, who joined the USWNT in 2010, had long tracked the start of players’ cycles, but it wasn’t until a few months before the World Cup kicked off in France that she implemented a more advanced approach.”For a few players, I always noticed that just before they started their cycle, their recovery fatigue was increased and their sleep was less,” Scott said. “I was noticing it for three or four players and thought, ‘We’re six months out from the World Cup, how we can help that?"”Part of Scott’s hesitance to do more with period tracking in previous years was that she did not know how to individualize it for each of the team’s 23 players.That obstacle was overcome when she met Dr. Georgie Bruinvels, a research scientist who focuses on menstruation and female athletes. Bruinvels is the creator of Fitr Woman, an app that provides women with daily training and nutrition suggestions tailored to their menstrual cycle.Scott and Bruinvels had the players fill out comprehensive surveys about their periods, from when they started to how long they lasted, what type of symptoms they felt and whether or not the symptoms impacted their play.Bruinvels took that data and sent Scott back a profile of each player, allowing her, and the USWNT medical team, to see the exact menstruation cycles for each player over the nearly 50 days the team was together in France for the World Cup.”We could see what [menstrual cycle] phase a player was in and what some of their symptoms were,” Scott said. “I would just text or say to a player, ‘Hey you’re in phase three and we know you get disrupted sleep, so make sure you do x, y and z."””We could dial in on players with the most symptoms,” she added.The menstrual cycle is counted from the first day of a woman’s period up to the first day of her next period. Changing hormone levels (estrogen and progesterone) throughout the cycle can cause symptoms like depression and anxiety, asthma, cramping, bloating and gas, in addition to bleeding, according to the U.S. Office on Women’s Health.The main phases of the menstruation cycle can be broken down to pre-ovulation and post-ovulation, explained Dr. Richard Beckerman, chairman of the Department of Obstetrics and Gynecology at Sibley Memorial Hospital in Washington, D.C.Research into how much a women’s menstrual cycle affects their athletic performance and may expose them to injury is still in its early stages and somewhat controversial, according to Beckerman.”We do know that there are parts of the cycle where women may have less ability to sleep and may have different eating habits,” he said. “But just as we find people are affected differently by different things, it can be very variable.”Beckerman though said that for athletes like those on the USWNT, menstruation cycles should be taken into consideration.”Whether it will truly pan out in terms of training women [based on] their cycles, I don’t know,” he said. “But it’s something we should definitely look at.”The USWNT focused on making sure sleep, hydration, nutrition and recovery were optimal to help counter the players’ period symptoms.In addition to personal texts and in-person reminders, the USWNT players also saw a visual reminder of the menstrual cycle every time they went to the elevator or to pick up mail, as Scott and her performance coaches posted signs in the team’s housing that showed the phases of the menstrual cycle, the symptoms and what players needed to do.”I think for the players, some of them were tracking their cycle anyways, but the education and the reminders were so important,” Scott said.Scott has already held education sessions on menstruation for players in the NWSL and hopes to expand it to youth programs as well.She is speaking out about the USWNT’s training tactic now, after the World Cup, to help break the taboo around periods around the world. The team’s period tracking strategy was first reported in the U.K.’s The Guardian.”For the 15-year-old girl who doesn’t have the support of a national team, I want to make it so she can talk about it with a female coach and a male coach,” Scott said. “We need to make people aware of it and not embarrassed by it.””This is physiologically what female athletes deal with,” she said.Perhaps the most high-profile example of the success of USWNT’s period tracking efforts came during the team’s final win against the Netherlands.Midfielder Rose Lavelle scored a breakaway goal in the team’s 2-0 win on July 7. The next day, she started her period.Copyright © 2019, ABC Radio. All rights reserved.