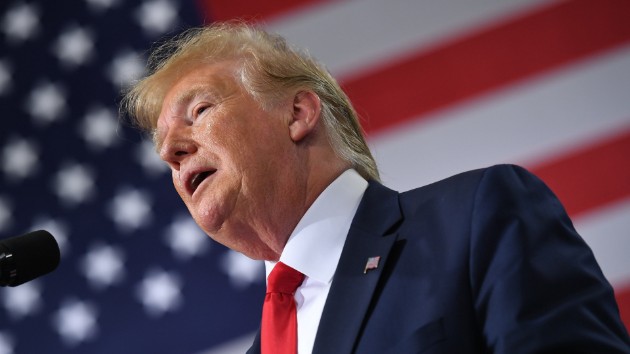 (WASHINGTON) — President Donald Trump extended his online attacks of progressive Democratic congresswomen on Monday, asking when they will apologize to the U.S., adding a host of new and unsubstantiated charges. “When will the Radical Left Congresswomen apologize to our Country, the people of Israel and even to the Office of the President, for the foul language they have used, and the terrible things they have said. So many people are angry at them & their horrible & disgusting actions!” Trump tweeted.Trump’s tweets come a day after he ratcheted up his attacks on the group of freshman lawmakers tweeting that “‘Progressive’ Democrat Congresswomen” should stop criticizing the government and “go back” to where they came from.Without naming the lawmakers, he appeared to be referring to what has come to be known as a “squad” of progressive freshman women of color, which includes Reps. Alexandria Ocasio-Cortez, D-N.Y., Ilhan Omar, D-Minn., Rashida Tlaib, D-Mich., and Ayanna Pressley, D-Mass. Ocasio-Cortez responded on Twitter Monday saying that his comments are “hallmark language of white supremacists.” “It’s important to note that the President’s words today, telling four American Congresswomen of color ‘go back to your own country,’ is hallmark language of white supremacists. Trump feels comfortable leading the GOP into outright racism, and that should concern all Americans,” Ocasio-Cortez tweeted.

On Monday afternoon, at an event at the White House, Trump was asked about the tweets. “Do you think those Democratic women are not American,” ABC News senior White House Correspondent Cecilia Vega asked. He replied, “If somebody has a problem with our country, if someone doesn’t want to be in our country they should leave. That’s all.” The president was also asked which congresswomen he was referring to in his tweets, and he said, “You can guess.”

Trump’s recent comments have been widely criticized by Democratic lawmakers, many who have characterized his attacks as racist. The president’s tweets follow a week of contention between the freshman lawmakers and House Speaker Nancy Pelosi. “I reject @realDonaldTrump’s xenophobic comments meant to divide our nation,” Pelosi tweeted on Sunday morning. “When @realDonaldTrump tells four American Congresswomen to go back to their countries, he reaffirms his plan to ‘Make America Great Again’ has always been about making America white again. Our diversity is our strength and our unity is our power,” Pelosi added coming to the defense of the lawmakers despite recent public disagreements.British Prime Minister Theresa May also weighed in. “The language that was used to refer to these women was completely unacceptable,” May told CNN on Monday morning.Top Republicans in Congress have been largely silent on these attacks. In an interview with the anchors of Fox & Friends on Monday morning, Sen. Lindsey Graham, a Trump ally, justified the president’s attacks on those four freshman congresswomen by branding them as “a bunch of Communists” who “hate Israel” and “hate our own country.” “We all know AOC and this crowd are a bunch of communists they hate Israel, they hate our own country,” Graham said. “I think they’re American citizens duly-elected running on an agenda that is disgusting, that the American people will reject.” Later Monday morning, Rep. Paul Mitchell, R-Mich., responded to the president on Twitter, writing that “we must be better than comments like these.”Copyright © 2019, ABC Radio. All rights reserved.