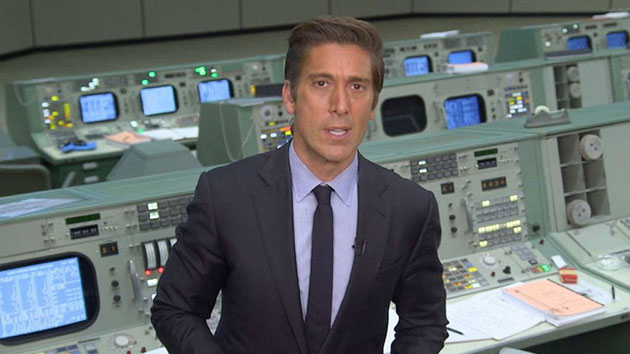 (NEW YORK) — Fifty years ago this week, the Apollo 11 astronauts — Neil Armstrong, Buzz Aldrin and Michael Collins — suited up as America waited with bated breath: would the trio be the first Americans to set foot on the moon?It was a grand, new goal that was first set by President John F. Kennedy.”I believe that this nation should commit itself to achieving the goal before this decade is out of landing a man on the moon and returning him safely to the Earth,” he said in May 1961.Astronauts who were preparing for the U.S. first lunar mission followed a complex training program. There were simulations. They walked in their spacesuits. They completed tests in the water.Americans counted the days — with so many questions about the mission — as did NASA. And then it was time.On July 16, 1969, families across the U.S. gathered in their living rooms — and hundreds of millions around the world — watched as the Apollo 11 lifted off into space.After traveling 240,000 miles in 76 hours, Apollo 11 entered in a lunar orbit. The next day, the lunar module Eagle, with Armstrong and Aldrin inside, separated from the command module where Collins remained.Hours later, the Eagle began its descent to the moon. But then, there was an alarm.”12-02. Standby,” Mission Control could be heard saying.Mission Control at NASA’s Johnson Space Center in Houston housed the engineers and flight directors who worked tirelessly to ensure Apollo 11’s mission was a success.A “12-02″ alarm meant that the lunar module’s computer was overloaded. If the problem could not be corrected, the landing would need to be aborted.”Give us a reading on the 12-02 program alarm,” Armstrong could be heard saying.The control room responded with silence.They would continue with the mission.Armstrong flew the lunar module manually, evading boulders in their planned landing location. With the fuel running critically low, Apollo flight director Gene Kranz, back in Mission Control, gave a 60-seconds-to-abort warning.Critical minutes passed and then Armstrong could be heard saying: “The Eagle has landed.””Roger, Tranquility. We copy you on the ground. You’ve got a bunch of guys about to turn blue. We’re breathing again. Thanks a lot,” Mission Control could be heard responding.”Thank you,” Aldrin said.Then, there was the sound of applause in Apollo Mission Control in Houston as some wiped away tears.Armstrong bounded across the moon’s surface on July 20, 1969. From the moon, he said those famous words: “That’s one small step for man. One giant leap for mankind.”Nineteen minutes later, it was Aldrin’s turn to take his first steps.”Beautiful view!” he said.President Richard Nixon spoke to Aldrin and Armstrong while they were in space, telling them: “I just can’t tell you how proud we all are.”Yet, back in Apollo Mission Control in Houston, after the cheering and the tears, they knew they had a lot of work still left to do as they guided the men back home.Copyright © 2019, ABC Radio. All rights reserved.