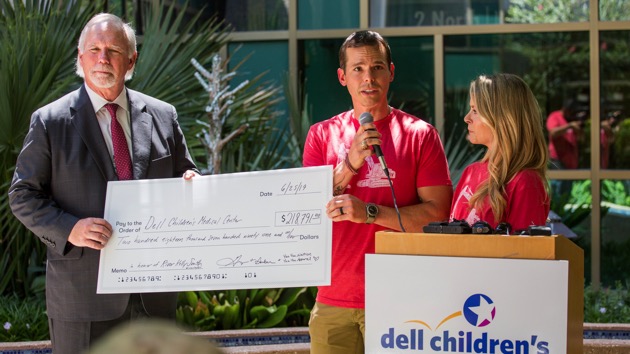 (NEW YORK) — Granger Smith and his wife Amber continue to give back to others in the wake of losing their 3-year-old son River to a drowning accident earlier this year.In an Instagram post Sunday, Amber Smith revealed the family donated River’s organs after his death, resulting in saving the lives of two people.”When 3 different neuro specialists told us that River had 0% chance of brain recovery (yes 0, not 10 or 1%, 0) after shock and reality set in, I thought, how can we bury our sweet baby and not try to help others?” she wrote, after explaining that she always knew she would donate her organs to help others after her own death.She continued, “His body is perfect, his organs are perfect, we had to do something. There are so many people waiting for an organ to save their lives. The doctors said donation was quite a process. We would have to search for viable recipients and it could take days.”But the family knew they had to continue his legacy somehow, and doctor’s tried to “expedite the process” of donation so they didn’t have to grieve any longer than possible.”I spent the night laying in bed with him, crying and talking to him while they kept running tests and taking blood,” she wrote. “The next morning family and staff lined the hall for the ‘walk of honor’. We told them River liked to go fast, so to honor him, they pushed him down that hall faster than they had ever pushed anyone. Granger and I held each other and cried.”Next, she announced that “our tiny, red-headed hero gave life to 2 adults.””A 49 year old woman and a 53 year old man. I cried when we opened it. Cried out of sadness & cried out of love,” she added. “I’m so proud to be River’s mama and I’m so grateful to God that he gave him to us for those incredible 3 years. I pray these 2 recipients live healthy, joy filled, full throttle lives just like Riv. It was one of the hardest, yet easiest, decisions we’ve ever made. There are over 113,000 people waiting for transplants & 20 people die each day waiting.”

Our care teams gathered today to receive a donation from Granger Smith & his family in memory of his son, River. “I don't know how you do it, but I thank God every day that there are people like you that love what you do and are so passionate about it," said Granger. pic.twitter.com/XVSNQJ4T3n

This act follows work the family has done to raise money for the hospital that treated River. Last month, Smith donated more than $218,000 he raised to Dell Children’s Medical Center in Austin, Texas.”You guys gave us a feeling that we were very special,” Smith told the hospital, handing them a check late last month. “The feeling that our son was very special, all the while knowing there are many kids here [in need of help] … We felt like we were the only ones in the world, the only ones that mattered.”Granger Smith also took to social media and YouTube in mid-June with his wife to tell fans how his family is holding up amid the unspeakable tragedy that happened on June 6.”We’ve been on quite the journey these past few weeks,” Smith wrote. “I’ve been dark on social media, but I still have a full understanding of the responsibility placed upon me as a public figure. I believe I’m obligated on certain levels to include you guys in my current journey, as I’ve been involved either personally or musically in yours.”Smith added that the loss of a son “makes life feel fragile,” but “it can remind us never to take a moment with those we love for granted.”Copyright © 2019, ABC Radio. All rights reserved.

Willie Garson died from pancreatic cancer, his obituary reveals
Jennifer Aniston reveals hilarious texts following David Schwimmer dating rumors
Jada Pinkett Smith celebrates 50th birthday on ‘Red Table Talk’; ABC to adapt Baratunde Thurston’s ‘How to Be Black’
Billy Porter reveals why he wants to say “thank you” to Elizabeth Taylor
Uma Thurman reveals she had an abortion when she was a teen: “It has been my darkest secret until now”
Two disbarred attorneys outside Texas sue abortion doctor under SB8