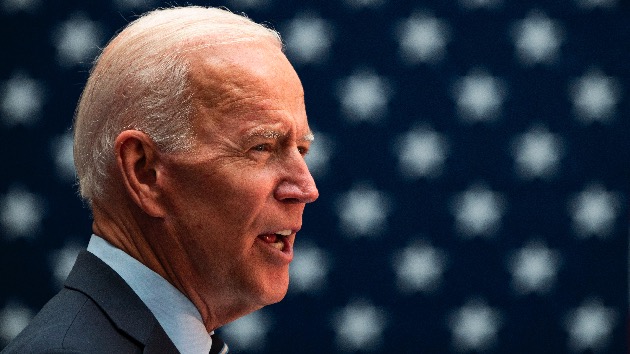 (WASHINGTON) — Former Vice President Joe Biden has released a plan his campaign said would make the Affordable Care Act easier to navigate with more choices for Americans.The plan would expand upon the Affordable Care Act passed under the Obama-Biden administration and provide a public option for patients to buy into, rather than a “Medicare-for-all” system that several of Biden’s 2020 rivals advocate for — a contrast Biden has already started to draw on the campaign trail.”We should not be starting from scratch. We should be building from what we have. There is no time to wait. And I that’s why I think, what I’m proposing — and we can do it — is to keep Obamacare, restore the cuts that have been made, and add a public option,” Biden said during an event in Dover, New Hampshire, on Friday. “If they like their employer-based insurance, you get to keep it. The fact of the matter is, all the other proposals make you — you lose it. Period.”A senior Biden campaign adviser said the he would continue to contrast his plan with those who propose moving to an entirely new system, saying that “is not the way to ensure that people in this country who need more affordable coverage are going to be able to get it.””You’ll certainly see him make a case about, you know, the urgency of having this fight and having it now,” the adviser added.In a video of the announcement released by the campaign, Biden expresses his surprise at so many Democratic candidates opposing the ACA.”I knew the Republicans would do everything in their power to repeal Obamacare. They still are. But I’m surprised that so many Democrats are running on getting rid of it,” Biden said.The campaign estimates the plan will cost $750 billion over 10 years. Senior advisers said Biden would rescind President Donald Trump’s tax cuts for the wealthy, raise the maximum tax bracket to 39 percent and get rid of the capital gains tax loophole for wealthy families with incomes greater than $1 million a year in order to cover the hefty price tag.The Biden plan deals with four core issues, which include universal coverage: reducing complexities within the system; providing affordable, quality coverage; tackling prescription drug pricing; and ensuring care for low-income areas.The proposal would get rid of the existing cap on health care tax credits, which is currently given to those making up to four times the poverty rate, which would allow for more middle class families to take advantage of the subsidy. Biden’s proposal would also ensure no family or individual pays more than 8.5 percent of their total income for health coverage.On prescription drugs, Biden’s plan would repeal the current law that prevents Medicare from negotiating drug pricing, while also allowing patients to purchase medications from other countries. The proposal would limit launch prices for drugs without any competition and limit price increases for generic drugs.Biden’s plan also would address women’s reproductive rights by codifying Roe. v. Wade, limiting the impact of state legislation on a woman’s right to an abortion and restoring funding to Planned Parenthood.Biden’s plan specifically states he would repeal the Hyde Amendment as president, which prevents the use of federal funds to be used on abortions except in cases of rape, incest, or harm to the mother’s life. Biden made headlines in June when he flipped his position on Hyde in a matter of days, claiming his health care policy was the catalyst for changing his position.The former vice president would repeal the Mexico City policy that blocks federal funding from organizations that expand the availability of abortion services or aim to decriminalize abortion globally. The plan will also address maternal mortality rates that disproportionately affect black women.Biden’s plan proposes doubling the current federal funding for community health centers in the United States, and improve access to mental health care as well.According to campaign officials, if elected, Biden would seek to implement the proposal through a combination of executive orders and working with Congress. Biden, who has been critical of some rivals for wanting to pass legislation through executive orders, would reverse Trump’s health care-related executive orders and work across the aisle in Congress to build on the ACA.The campaign officials say they are not worried that the ACA will be struck down by the Supreme Court, believing that it’s been upheld twice already and will continue to be upheld as constitutional a third time.According to a senior Biden campaign official, this initial rollout doesn’t complete the former vice president’s plan for health care. The campaign expects to release more detailed aspects of the plan going forward, including plans on guns, dealing with devastating diseases like cancer, Alzheimer’s disease, diabetes and addiction.Copyright © 2019, ABC Radio. All rights reserved.