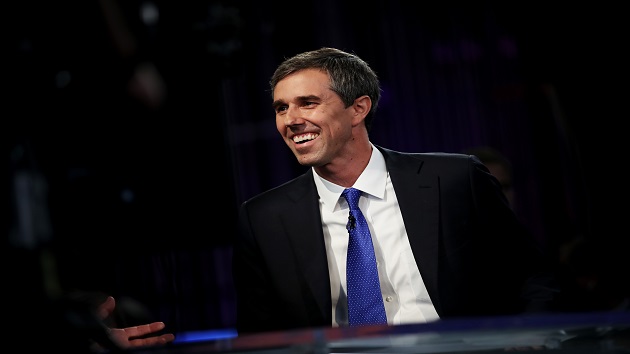 (NEW YORK) — Democratic presidential candidate Beto O’Rourke has revealed that he and his wife Amy are descended from slave owners.In a Medium post published on Sunday titled “Rose and Eliza,” O’Rourke released old documents showing the names of two female slaves listed as property owned by his distant relatives in the mid-1800s.

“I was recently given documents showing that both Amy and I are descended from people who owned slaves. Along with other possessions listed in their property log were two human beings, Rose and Eliza,” O’Rourke wrote.The former Texas congressman said that while he has been talking about the legacy of slavery on the campaign trail, the long-standing issue “now has a more personal connection.”According to the documents pictured in O’Rourke’s post, Andrew Cowan Jasper, his paternal great-great-great grandfather, owned two female slaves in 1850. He also claims Frederick Williams, his maternal great-great-great grandfather, may have also owned slaves in 1860, but notes he is not fully certain they are relatives. The candidate also revealed that his wife, Amy O’Rourke, had an ancestor who owned slaves, and another member of her family was in the Confederate Army.”They were able to build wealth on the backs and off the sweat of others, wealth that they would then be able to pass down to their children and their children’s children,” O’Rourke wrote of his ancestors. “In some way, and in some form, that advantage would pass through to me and my children.””I benefit from a system that my ancestors built to favor themselves at the expense of others,” he added, referencing the theme of white privilege that he often discusses in town halls as a presidential candidate, and most recently on ABC’s The View.O’Rourke wrote in his post about how the legacy of slavery still affects African Americans today, explaining how everything from Jim Crow, to denial of services, mass incarceration and educational injustice have contributed to the economic disparities in black communities.In light of his revelation, O’Rourke vowed to continue to support reparations for slavery, though he did not explicitly commit to monetary compensation for African American slave descendants. He did, however, describe his commitment to close the U.S. racial wealth gap if elected.”As a person, as a candidate for the office of the Presidency, I will do everything I can to deliver on this responsibility,” he wrote. “In addition to making significant changes to education policy (immediately address $23 billion in underfunding for minority-majority public schools), economic policy (ensuring equal pay, deploying capital to minority- and women-owned businesses, $25 billion in government procurement to these same businesses), healthcare (universal healthcare and home health visits to women of color to reverse trend in maternal and infant mortality) and criminal justice (police accountability, ending the drug war, and expunging arrest records for nonviolent drug crimes).”O’Rourke’s post about his ancestry comes at a time when racial economic disparities are among the key issues in the 2020 presidential race.His blog post was also published on the same day as President Trump’s remarks about four Democratic congresswomen of color, who he said should “go back” to the countries they came from after they were critical of his administration.O’Rourke was among several 2020 presidential candidates who blasted President Donald Trump on Sunday, calling his comments “racist.””These congresswomen are every bit as American as you — and represent our values better than you ever will,” he tweeted in response to Trump.Copyright © 2019, ABC Radio. All rights reserved.

‘We are prepared’: Law enforcement stresses readiness ahead of right-wing rally
‘Law & Order: SVU’ co-star Denmore Barnes on his “surprise” exit: “I don’t totally know why this happened”
Murdaugh murders and mysteries timeline: Key events in the South Carolina family’s scandals and deaths
In theaters now: Gerard Butler and Frank Grillo in the “irreverent, explosive” ‘COPSHOP’
These vaccine mandates are already in place to attend school in the US
Confused about boosters? Here are some answers