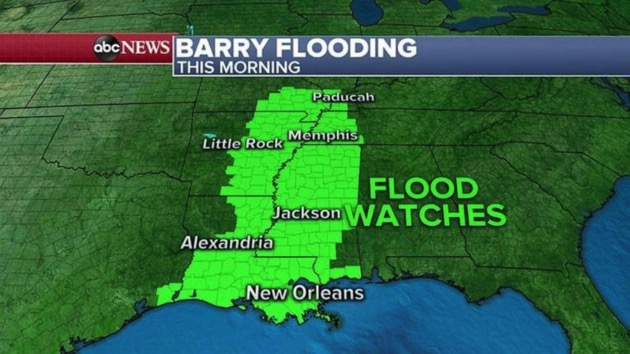 (NEW YORK) — Barry hit the Louisiana coastline at a Category 1 hurricane with 75 mph winds but then returned to being a tropical storm, leaving behind massive flooding throughout parts of the state.The highest rainfall total, about a foot, was seen in southwestern Louisiana. A 7-foot storm surge was reported in Amerada Pass.On Monday morning, with more than 50,000 customers in Louisiana still without power, Barry was weakening fast while centered over Arkansas.Tropical moisture from the Gulf of Mexico is forecast to keep streaming north into the Mississippi River Valley.Flood alerts were issued across eight states on Monday as more heavy rain is expected.Barry is unlikely to move much heading into Monday night, meaning more flash flooding is expected closer to the storm’s current location.The center of what’s left of Barry should move into the Midwest by Tuesday evening, with heavy rains expected from Tennessee into Illinois and Indiana.Over the next two to three days, some parts of Arkansas, Mississippi and Tennessee could get an additional 6 to 10 inches of rain. Flash flooding and river flooding are expected.

Generational wealth implications: Black and Latino-owned homes are more likely to be undervalued
Nick Cannon teases possibility of having more children: “My therapist says I should be celibate”
COVID-19 live updates: More outbreaks in schools without mask policies, CDC finds
Arrest warrant issued for Brian Laundrie in Wyoming as search presses on: Live updates
Kids whose mothers were depressed during pregnancy more likely to be depressed: Study
‘Goliath’ star Billy Bob Thornton on taking the reins as director for the final season premiere