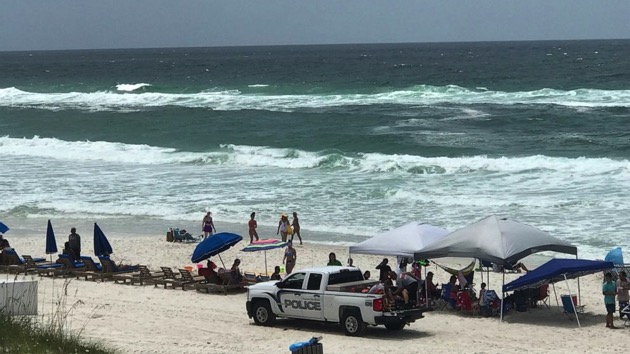 (PANAMA CITY BEACH, Fla.) — Authorities made 40 water rescues in Panama City Beach on Sunday due to deadly rip currents off the Florida coast.One person died after getting swept away in an extremely strong rip current, according to the Panama City Beach Police Department.A rip current forms when a narrow, fast-moving section of water travels in an offshore direction. Rip currents flow away from the shoreline perpendicular to shore, according to the National Oceanic and Atmospheric Administration.Double red flags were flying along the shore of Panama City Beach on Sunday. Beachgoers were seen forming a human chain to save a swimmer caught in a rip current.The Panama City Beach Fire Rescue said it was receiving “nonstop calls” for rescues that day and urged people to stay out of the water.”Please avoid getting in the water,” the fire department said in a Facebook post. “The decision to ignore the warnings has impacts far beyond the swimmer that becomes distressed.”Rip current speeds have been measured as high as 8 feet per second, faster than any Olympic swimmer ever recorded, according to NOAA, which says it’s important “not to panic” if you are ever caught in a rip current.”A person caught in a rip can be swept away from shore very quickly,” NOAA says on its website. “Continue to breathe, try to keep your head above water, and don’t exhaust yourself fighting against the force of the current.”NOAA advises people caught in rip currents to swim parallel to the shore instead of toward it. Swimmers also can let the current carry them out to sea until the force weakens.