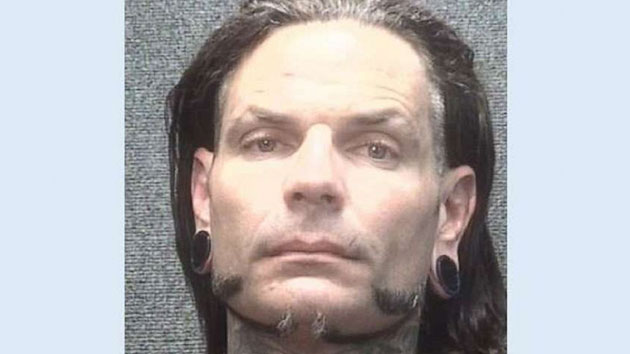 (MYRTLE BEACH, S.C.) — World Wrestling Entertainment star Jeff Hardy was arrested on Saturday for public intoxication.The pro wrestler was taken into custody in the popular seaside community of Myrtle Beach, South Carolina, after police responded to calls about an intoxicated person, according to the Myrtle Beach Police Department.Hardy was arrested at about 11 a.m., Myrtle Beach Police Cpl. Thomas Vest told Florence ABC affiliate WPDE-TV.The 41-year-old star has been on the sidelines for months due to a leg injury.WWE released a statement to several media outlets saying Hardy is “responsible for his own personal actions.”Hardy, who has for years starred alongside his brother Matt as one half of the tag team the Hardy Boys, has a history of arrests and substance abuse.He was arrested at his home in North Carolina in September 2009 for possession of prescription pills, anabolic steroids and drug paraphernalia. He pleaded guilty and served 10 days in prison and paid a $100,000 fine in 2011.Hardy was again arrested, this time for driving while intoxicated, after a car crash in March 2018 in Concord, North Carolina.The wrestler captured fans’ hearts for his death-defying stunts with WWE from 1998 through 2003. After multiple tag team championship reigns with his brother, and a release from the company for his erratic behavior, he finally won the heavyweight title in his return to WWE in 2009. He spent multiple stints in TNA wrestling, a competitor to WWE, and won its heavyweight title as well.After seven years away from WWE, he and his brother made a surprise return at Wrestlemania in 2017.Copyright © 2019, ABC Radio. All rights reserved.