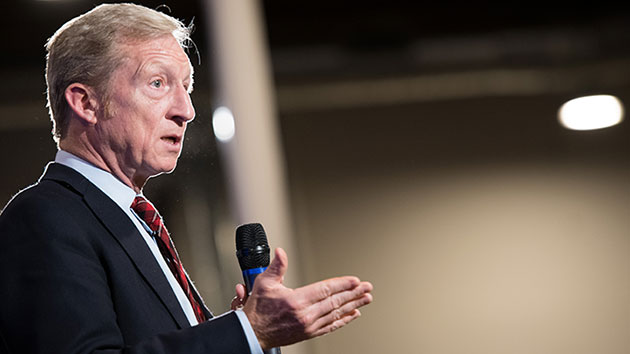 (NEW YORK) — Billionaire liberal activist Tom Steyer, who announced earlier this week that he is running for president, joined ABC’s This Week to discuss the early stages of a campaign that he has pledged to spend over $100 million of his own money on to capture his party’s nomination.Steyer defended his recent push for impeachment of President Donald Trump, telling ABC News Chief White House Correspondent Jonathan Karl that “actual democracy,” and more public visibility will boost support for Trump’s removal.”What we’ve been pushing for in terms of the argument that this president is corrupt, we all now know that. This president is the most corrupt in American history and is a danger to the country and the Constitution — that argument we have won,” Steyer said, brushing off recent polling that shows support for impeachment below 40% among American adults.”The only way to actually push this the right way is what we’ve been saying, actual democracy. Get it on TV, let the American people see the facts and let them judge, that hasn’t happened,” he added.Steyer also responded to the early criticism he has gotten from some of his Democratic rivals, such as Sen. Bernie Sanders, I-Vt., and Sen. Elizabeth Warren, D-Mass., who have said his billionaire status is not a qualification to lead the Democratic Party and defeat Trump.”We have a broken government that has been corrupted by corporate money. We need to push the power back to the American people, to re-take the democracy and I’ve been doing that successfully — from the outside — 10 years,” Steyer said before painting those critical of his campaign as “insiders.””The question is, if we’re going to take back this democracy, is someone going to lead it who has successfully done it from the outside, or a bunch of people from Washington, D.C.?” Steyer said, adding that he could “guarantee” that he would continue to fund efforts to register more people to vote and continue to devote resources to the other causes he backs.Steyer was also pressed about investments the hedge fund he once managed made in coal mines and power plants in countries like Indonesia and China, despite his championing himself as a defender of the environment and as someone who is on the front lines of combatting climate change.”In our business, we invested in every part of the economy, including fossil fuels. When I realized what a threat this was … to our environment, and to the people of the United States and people around the world. I changed, I divested from all of that stuff, I left my business, I took the giving pledge to give my money to good causes. And I’m asking every American to do exactly what I did,” Steyer said.To combat the effects of climate change Steyer said the United States has to evaluate and change the entire way.”The United States needs to change as a society. We need to do a gigantic, across-the-board investment to change how this society runs, what actually powers this society,” Steyer said, adding that to reverse the effects of climate change the country needs to address the fossil fuel companies that “dominate our politics” and “don’t let us do any of the things we need to do.”Steyer, who has spent years pouring millions of dollars into special causes, such as combatting climate change through outside groups, such as NextGen America, entered the race months after having said at a January press conference that he would not run.The Californian and former hedge fund manager has more recently made his main mission to gin up support for the impeachment of Trump, spending millions on a national ad campaign through the group NeedtoImpeach, which he founded and funds.While Steyer said that he will still spend upwards of $50 million through his outside groups, it appears for now he is fully focused on the arduous task of rising through a pack of two dozen Democrats to capture the party’s nomination to achieve his goal of removing Trump from office in November 2020.In his announcement video released earlier this week Steyer focused heavily on what he describes as the corrosive effect money and corporations have had on American politics.“I think people believe corporations have bought the democracy, that politicians don’t care about or respect them … but are actually working for the people that rigged the system. Really, what we’re trying to do is make democracy work by pushing power down to the people,” Steyer said in a video that features an array of the faces of modern American corporate excess.For his first stop on the campaign trail, Steyer visited the critical early primary state of South Carolina, where he will have to make quick inroads with the African-American community if he wants to compete with the likes of former Vice President Joe Biden, California Sen. Kamala Harris and Massachusetts Sen. Elizabeth Warren, who have all made early investments in the state and have visited multiple times.”In South Carolina, they cut the taxes for big corporations,” Steyer said during a campaign stop Friday in Charleston. “And that means they have to cut school bills, they have to cut education itself. They can’t afford health care for everybody in the state of South Carolina. That’s not because we don’t have enough money. That’s because corporations and the people who run and own them control our government, and want all the money, and the resources are not spread around the community.” Copyright © 2019, ABC Radio. All rights reserved.