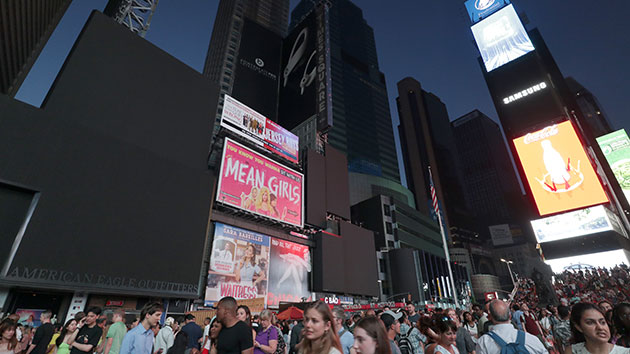 (NEW YORK) — Parts of midtown Manhattan in New York City were hit with a power outage on Saturday evening, causing Times Square billboards to go dark, leaving people trapped in elevators and shutting down a Jennifer Lopez concert at Madison Square Garden.Just before midnight on Saturday, Consolidated Edison Inc., New York City’s power provider, said that power had been restored to all of the 73,000 affected customers, though some lingering issues continued, such as darkened traffic lights. The utility’s news conference at one of its Upper West Side locations was briefly interrupted by whoops and cheers as lights came back on.”This is something that we have plans for — every precinct has plans for. … We’ve been through this and we really know what we need to do,” New York Police Commissioner James O’Neill said at a late Saturday press conference.Luis Ferer said he was walking from Central Park to meet a friend at Lincoln Center at about 7:20 p.m. and was startled to see the darkened streets.”The only things you could see were the car headlights and the neon lights of the halal carts. It was nerve-racking. I was asking why there weren’t any police.”Photos circulated on social media showing the iconic sign of Radio Music Hall unlit, movie-goers evacuating from Lincoln Center’s cinema and the sprawling Columbus Circle subway station without lights. Traffic lights were not working along a stretch of Manhattan that extends up about a mile, from midtown, near Times Square, and extending up to the Upper West Side, the area close to Lincoln Center performing arts complex, and west from Central Park to the Hudson River.”This could be a very chaotic situation. We saw New Yorkers at their best. … New Yorkers helping neighbors,” Gov. Andrew Cuomo said late Saturday.In some cases, New Yorkers stepped in to help direct traffic.”I applaud all New Yorkers,” Cuomo said. “When things are at their worst, New Yorkers are at their best.”Adam Korzeniewski, a political consultant, was heading to meet a friend for dinner on the Upper West Side when the lights went out.“It was surreal, because normally you have the lights and commotion of New York City. But it was pitch black,” he said.He said he saw a handful of pedestrians step in to direct traffic. Once he reached the northern point of the blackout, he said he saw an “exodus of people” walking towards the lit-up buildings.The outage began just before 7 p.m. and initially impacted about 20,000 customers. An hour later, the impacted area nearly doubled, and the outage eventually spread even further, causing the lights to go out at Madison Square Garden, a Con Ed spokesman said.The singer Jennifer Lopez said on Twitter she would reschedule her show after her performance was cut short. Concert attendees posted the moment when the stadium went dark.A spokesman for the city fire department said they responded to “numerous” calls about stuck elevators and power outages.The Twitter account for New York subways said the agency is working to keep trains moving and bypassed affected stations. All lines and stations were back operating as usual by 2 a.m. on Sunday.Mayor Bill de Blasio, who is Iowa to campaign for president, initially delayed returning to the city, but later his spokesperson said he was on his way back.O’Neill said he’d been speaking to de Blasio throughout the outage and “he knows the lights are back on and he’s real proud of the first responders.”Two city officials briefed on the situation told ABC News that the outages at first appeared to be under control. But when it appeared the problem was getting worse, it set off a scramble among city and state officials who feared that the outages could expand further and the mayor decide to return to New York.While the official numbers may not be available until later Sunday, the FDNY told New York ABC station WABC-TV that call volume in Manhattan jumped exponentially within the first few hours of the blackout. The FDNY responded to approximately 1,000 calls in Manhattan alone, with about 750 related to stuck elevators and automatic alarms.”We’ve got to make sure it doesn’t happen again and it’s designed to not happen again,” Cuomo said.Con Ed said it dealt with returning power to the city Saturday night and would begin assessing what happened throughout the night and into Sunday.Copyright © 2019, ABC Radio. All rights reserved.