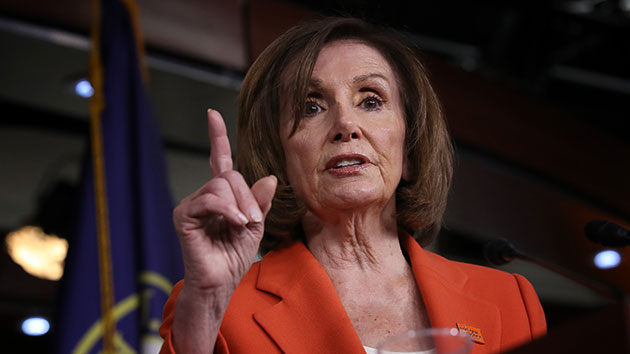 (WASHINGTON) — After President Trump tweeted that “‘Progressive’ Democrat Congresswomen” should stop criticizing the government and “go back” to where they came from, House Speaker Nancy Pelosi condemned the tweets as “xenophobic.””I reject @realDonaldTrump’s xenophobic comments meant to divide our nation,” Pelosi tweeted on Sunday morning.The president did not explicitly name the congresswomen was referring to, but said they “originally came from countries whose governments are a complete and total catastrophe.” He then went on to say that they should “go back and help fix the totally broken and crime infested places from which they came. Then come back and show us how it is done.”Pelosi seems to conclude Trump was referring to four recently-elected and vocal progressive Democratic women — Reps. Alexandria Ocasio-Cortez, D-N.Y., Ilhan Omar, D-Minn., Ayanna Pressley, D-Mass. and Rashida Tlaib D-Mich.Only one of the four women, Rep. Omar, is foreign-born, and all are U.S. citizens. Rep. Ocasio-Cortez was born in New York, Rep. Pressley was born in Cincinnati, and Rep. Tlaib was born in Detroit.In defending the members of Congress, who are all women of color, Pelosi slammed the president for wanting to “make America white again.””When @realDonaldTrump tells four American Congresswomen to go back to their countries, he reaffirms his plan to ‘Make America Great Again’ has always been about making America white again. Our diversity is our strength and our unity is our power,” the speaker tweeted in response on Sunday morning.Copyright © 2019, ABC Radio. All rights reserved.