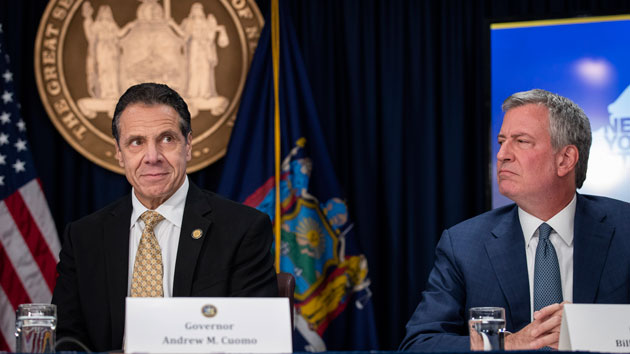 (NEW YORK) — The power may be back on in New York City, but a five-hour Saturday night blackout continued to cast light on a rift between Gov. Andrew Cuomo and Democratic presidential candidate Mayor Bill de Blasio.De Blasio was campaigning in Waterloo, Iowa, when a massive power outage struck, plunging 73,000 Con Edison customers and tens of thousands of the mayor’s constituents and tourists in a wide swath of Manhattan into darkness.”Look, mayors are important. And situations like this come up, you know. And you have to be on-site. I believe that,” Cuomo said in an interview on CNN during the crisis.De Blasio responded Sunday, saying he did his job. Even from more than 1,000 miles away, the mayor said he was able to “take charge” of the crisis.A 13,000-volt distribution feeder circuit on the west side of Manhattan malfunctioned at 6:47 p.m. Saturday, cutting electricity to 60 blocks stretching from the Greenwich Village neighborhood to the Upper West Side on the 42nd anniversary of a 1977 near-citywide blackout that led to widespread looting and vandalism.Saturday’s blackout crippled the subway system, knocked out traffic lights on Manhattan’s west side and caused the cancellations of numerous concerts and events, including several Broadway plays and a performance by Jennifer Lopez at Madison Square Garden. Lopez tweeted Sunday that her canceled show has been rescheduled for Monday night, tweeting, “Gonna take more than a city-wide blackout to shut us down.”More than 400 occupied elevators got stuck during the outage, according to New York Fire Department Commissioner Daniel Nigro. No injuries were reported from the massive power outage.De Blasio flew home Sunday morning from the campaign trail after making a four-hour drive from Iowa to Chicago. He immediately went to inspect the ConEd equipment that caused a domino effect and cut power to six of the utility’s sectors or neighborhoods.The mayor said at a news conference Sunday afternoon in Manhattan that one thing he knows is that “this was not a cyber attack and this was not an act of physical terrorism.”He said the cause of the circuit malfunction remains under investigation.ConEd President Timothy Crawley said it is still unclear why the circuit feeder malfunctioned. The power grid was not overloaded, he added, nor was it a question of the equipment’s age.While “we sincerely regret the disruption,” he said, “we think the grid is sound.”It was the first widespread power outage in New York City since 2006, when a blackout started in the borough of Queens and lasted for 90 minutes. The last citywide blackout occurred in 2003 and was part of a major power outage that affected the entire Northeast corridor.De Blasio was asked several times if he had any regrets about being out of the city during the emergency.”I want people to understand that with this job and any public CEO today, you have to take charge wherever you are and I did that,” de Blasio said.He said once he learned the power outage and its root cause was not going to be solved immediately, he made arrangements to return to New York.De Blasio held a news conference in Iowa Saturday night, saying he has been in constant communication with emergency officials in the city. He decided to stay in the Midwest instead of immediately traveling to midtown, leaving himself open to criticism from Cuomo, a fellow Democrat.”It was knowing that it was going to take quite a while to get back, so I was going to have to provide guidance wherever I was, which is what any leader has to do…,” the mayor said Sunday.Earlier Sunday, de Blasio defended himself on national TV.”When you’re a mayor or a governor you’re going to travel for a variety of reasons. The important thing is to have the hand on the wheel, make sure things are moving effectively and communicate to people. Even from where I was, I was able to do that right away with the people of New York City,” de Blasio said on CNN’s “State of the Union” while he was still in Chicago waiting to fly home.But Cuomo said Saturday night that he can count “on my fingers” the number of trips he’s taken outside the state during his eight years as governor.”I’m not going to second-guess anyone, either,” Cuomo said. “I do my job the way I think I should do my job and I leave it to others to do the same.”While de Blasio was in Iowa, Cuomo hit the darkened streets of the city expressing outrage over the outage and demanding ConEd get to the bottom of it.Cuomo and de Blasio’s not-so-cozy relationship dates back to when the mayor was first elected in 2013 and proposed a tax on wealthy individuals to pay for pre-kindergarten in all five boroughs. Cuomo publicly ripped the plan, arguing it would prompt wealthy people to flee the city.In 2015, the relationship soured even more when during a blizzard the governor, who controls the agency that operates the city’s trains and buses, ordered the shutdown subway system without consulting the mayor.The rift became so pronounced that Hillary Clinton joked about it during her failed run for president in 2016 in remarks during the Al Smith Dinner in New York, an annual white-tie fundraiser for Catholic charities that brings partisan rivals together.“Your Eminence, you do deserve great credit for bringing together two people who have been at each other’s throats, mortal enemies, bitter foes,” Clinton said in her speech to Cardinal Timothy Dolan, head of the New York Archdiocese. “I’ve got to ask: How did you get the Governor and Mayor here together tonight?”Following Saturday’s blackout, both Cuomo and de Blasio agreed on two things: that first responders, city officials and New Yorkers, in general, did a great job preventing the outage from becoming dangerous and chaotic, and that an investigation needs to be launched to determine how to prevent a repeat in the future.Copyright © 2019, ABC Radio. All rights reserved.