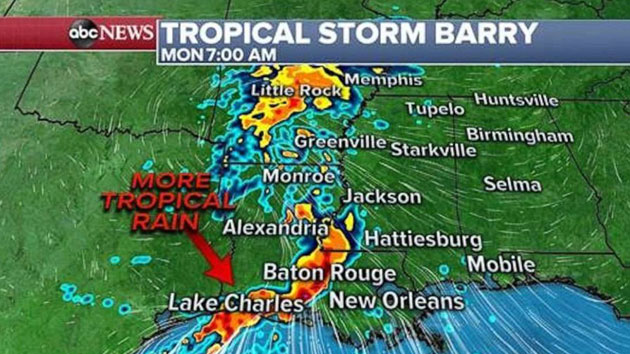 (BATON ROUGE, La.) — Residents of Louisiana felt the full brunt of Tropical Storm Barry’s rainfall overnight as they woke to find localized flooding and tens of thousands without power across the state.Rain is expected throughout Sunday, especially in Louisiana, even as nearly 7 inches of rain had fallen in Montrose, Alabama, and just over 6 inches fell in Ocean Springs, Mississippi, through the first day of the storm.”This storm still has a long way to go before it leaves the state,” Louisiana Gov. John Bel Edwards said at a press conference late Saturday. “It continues to move too slowly, and some people may think that the threat is over. Some people may be tempted to think that because it was a Category 1 when it came ashore and has already been downgraded to a tropical storm that it does not present a threat.”That is not the case. We still have a significant amount of rain coming our way.”President Trump tweeted his support to the residents of Louisiana and the surrounding areas Sunday morning.”A big risk of major flooding in large parts of Louisiana and all across the Gulf Coast,” he wrote. “Please be very careful!”There were over 152,000 customers without power in the state as of 5 a.m. on Sunday. That’s an increase of about 30,000 customers from Saturday afternoon.Barry made landfall as a very weak Category 1 hurricane on Saturday afternoon near Intercostal City, Louisiana. The last hurricane to make landfall in Louisiana was Nate in 2017.The levees have held in most prominent cities, but a levee was overtopped in Terrebonne Parish, on the coast southeast of New Orleans, where the Coast Guard rescued 12 people and two dogs by helicopter.”Every storm is different and sometimes we want to think we know what to expect from today’s storm based on what we’ve experienced in the past,” Edwards said. “And we continually learn that lesson, but every storm is different.”The storm is now moving over land, but it is not over. Life-threatening flash flooding and river flooding are still expected from Louisiana up through the lower Mississippi Valley through Monday.Rain bands will continue to intensify and expand on the eastern and southern Side of Barry on Sunday. Rainfall rates in these bands could exceed 3 inches per hour.Storm surge will remain a localized issue along the Louisiana coast until the storm weakens a little more, and the winds shift back offshore.The most concerning aspect of this storm is the continued guidance showing not much movement over the next 48 hours.On Monday morning, heavy rain will continue to push into parts of Arkansas as Barry — or what remains of it — barely moves northward. However, more tropical rain will push into parts of southern Louisiana from Lake Charles to Baton Rouge with rainfall rates still exceeding 3 inches per hour in spots.Over a foot of rain is still expected in parts of the region, especially southern Louisiana, and some areas could quickly pick up 3 to 6 inches of rain in just a few hours during the day Sunday and on Monday morning.Early predictions for river crests are being lowered, but they will remain a concern heading into the work week.”Because of a change in the rain forecast, the crest predictions for many of the rivers have actually gone down,” Edwards said. “However I should point out, that even the revised crest heights qualify as major flooding and present serious threats to life and to property. I implore you to remain alert and aware.”Copyright © 2019, ABC Radio. All rights reserved.