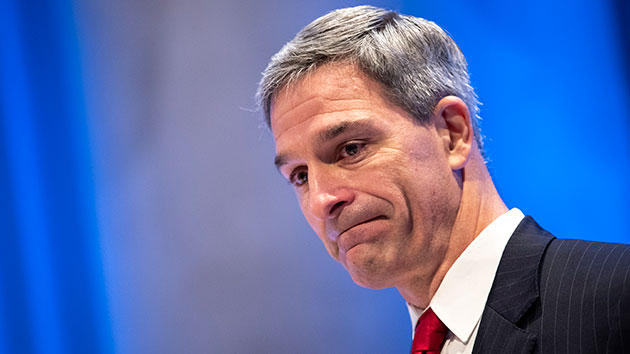 (WASHINGTON) — Acting U.S. Citizenship and Immigration Services Director Ken Cuccinelli said that conditions at border detention facilities are “because Congress has let it happen.””When Congress provides the professionals at the border what they need, success happens. Success being measured as avoiding overcrowding,” he told ABC News Chief White House correspondent Jonathan Karl on This Week Sunday.Cuccinelli went on to call for Congress to close “asylum loopholes” to discourage illegal immigration.Vice President Mike Pence and Republican lawmakers toured two border detention facilities in Texas on Friday. When the vice president toured a newer facility housing children, many nodded when asked if they were comfortable and had enough food.However, troubling video emerged from his visit to the second facility in McAllen Texas, housing adult men. One detained man told reporters he had been held for 40 days and a report from the Washington Post noted the strong smell of body odor in the air.”This is very tough stuff,” Pence said after interacting with detainees.The conditions, Cuccinelli said on Sunday, are “a reality of facilities not designed to handle the swamping at the border.”More than 100,000 people have been apprehended for attempting to illegally cross the border in each of the last four months, numbers he said the Department of Homeland Security is trying to manage.When asked about the alternative of letting people go and then return for court hearings, Cuccinelli argued that’s the wrong alternative.”They can also go home, which is our preference, when they come illegally here,” he added.He echoed administration claims that many migrants fail to return for asylum hearings when released from detention, but according to The Washington Post, the most recent Justice Department annual figures show that “44% of migrants who were not in custody failed to show up for their court proceedings,” a rate lower than the administration had claimed in recent weeks.Those “claiming asylum with no basis,” he said are “clogging a system for legitimate asylum seekers,” a process USCIS oversees.On Friday, President Donald Trump confirmed that immigration raids would begin on Sunday.”They’re going to take people out and they’re going to bring them back to their countries or they’re going to take criminals out, put them in prison, or put them in prison in the countries they came from,” Trump said at the White House.While Cuccinelli declined to get specific on when the expected immigration raids would start, he said on Sunday that “it shows how far we’ve fallen that it’s even news that ICE is doing its job.”He added that ICE agents have a tougher time doing their job when “a lot of people in Congress throw the vitriol at them.”Cuccinelli was named the acting director of USCIS in June. The conservative immigration hardliner is the former Virginia attorney general and was initially critical of Trump during the 2016 election.Copyright © 2019, ABC Radio. All rights reserved.

‘We are prepared’: Law enforcement stresses readiness ahead of right-wing rally
Emmy Awards host Cedric the Entertainer says he’s committed to improving conditions for Black comedians
Priyanka Chopra responds to growing criticism over ‘The Activist’: “The show got it wrong”
These vaccine mandates are already in place to attend school in the US
Confused about boosters? Here are some answers
Apprehensions at the southern border surpass 200,000 in August