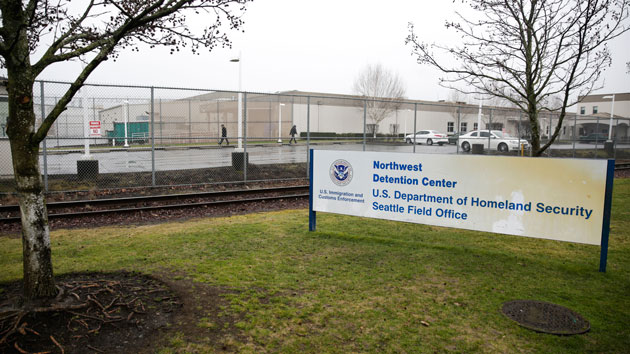 (TACOMA, Wash.) — A man armed with a rifle, flares and “incendiary devices” at an U.S. Immigration and Customs Enforcement (ICE) detention center in Washington state was fatally shot by police early Saturday, authorities said.The unidentified man was allegedly throwing lit objects at buildings at Tacoma’s North West Detention Center on Saturday when he was shot following a confrontation with responding officers, Tacoma Police Department officials said in a statement released on Saturday.A worker first reported that a man outside the facility was armed with a rifle around 4 a.m., Tacoma police said.”It was reported the male was throwing incendiary devices at the Detention Center and then at vehicles in the parking lot,” the statement said. “A vehicle was set on fire. The male attempted to ignite a large propane tank and set out buildings on fire. The male continued throwing lit objects at the buildings and cars.”Upon arriving on the scene and locating the man, “officers called out shots were fired,” according to the Tacoma Police statement. “Officers noted that in addition to the weapon, he was wearing a satchel and had flares on his person.”Police did not immediately identify the deceased man, citing an ongoing investigation.None of the police officers involved in the incident were injured. They were not identified by name but police officials said that the four male officers involved were placed on paid leave per department policy after an officer-involved shooting.The officers involved include: a 45-year-old who has been with the Tacoma Police Department for 20 years, a 27-year old with four years on the force, a 28-year old with one year as a Tacoma police officer, and a 24-year old with nine months on the force.Agents with the Bureau of Alcohol, Tobacco and Firearms (ATF) from the Seattle field office also responded to the scene, according to officials.Copyright © 2019, ABC Radio. All rights reserved.