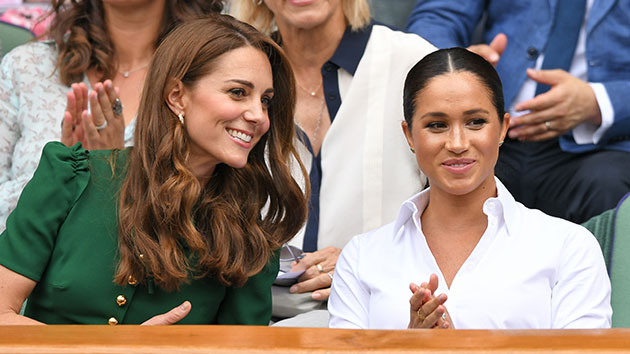 (LONDON) — For the second year in a row, royal sisters-in-law Kate, the Duchess of Cambridge, and Meghan, the Duchess of Sussex, stepped out together for the Ladies’ Singles Final at Wimbledon.And for the second year in a row, the pair watched Meghan’s close friend Serena Williams compete in the final, vying for her 24th Grand Slam title.Duchesses Kate and Meghan watched from the royal box Saturday as Williams took on seventh-seed Simona Halep.”She couldn’t be a better friend to me,” Williams said of Meghan in a press conference Wednesday following her semifinal win. “Low moments, high moments, she’s always there and that’s all I want to be to her.”Saturday also marked the second Wimbledon appearance this year for both Kate and Meghan.The Duchess of Sussex made a surprise appearance at Wimbledon last week to watch Williams win her second round match. That visit drew some controversy over allegations of extra tight security around the duchess, who sat with friends in the members’ section.Kate, patron of the All England Lawn Tennis and Croquet Club, also visited Wimbledon last week, watching a British player compete and visiting the practice courts and warm-up area.Saturday’s appearance at Wimbledon is the second joint outing this week for Kate and Meghan.The pair stepped out, with their kids in tow, on Wednesday to watch their husbands, Prince William and Prince Harry, play a charity polo match.Meghan was a newlywed last year when she sat courtside with Kate for the Ladies’ Singles Final, in which Williams lost to Angelique Kerber. Williams and her husband, Alexis Ohanian, were guests at Harry and Meghan’s May 2018 wedding in Windsor.Kate is a longtime tennis fan and a tennis player. She told guests at Wimbledon last week that eight-time Wimbledon winner Roger Federer, also a semifinalist in this year’s tournament, is the favorite player of her 5-year-old son Prince George.She also said the superstar has even played tennis with George, which Federer said took place at Kate’s parents’ home in Bucklebury.Kate and Prince William plan to attend the Men’s Singles Final Sunday at Wimbledon, according to Kensington Palace.Copyright © 2019, ABC Radio. All rights reserved.

2 being treated for gunshot wounds following shooting at Heritage High School in Virginia: Police
“You’re kidding me!” Stunned Ashley Graham confirms she’s having twin boys in sweet video
Army Gen. Mark Milley was ‘not going rogue’ in secret calls to China, authors of new book claim
Biden administration to ease restrictions on travelers to US in November
23-year-old woman uses TikTok to highlight influential Latinas
Traveling over the holidays? Here’s how to stay safe from COVID-19