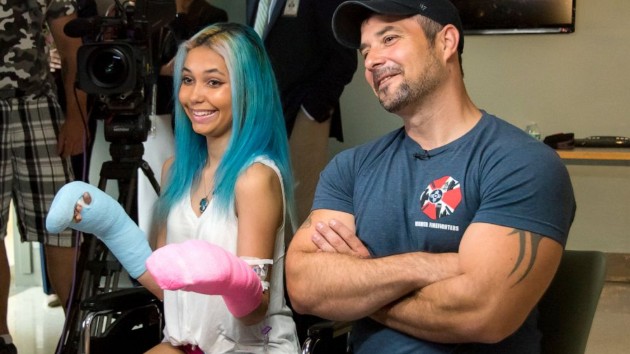 (NEW YORK) — The North Carolina teen who was bit by a shark earlier this summer is now out of the hospital after losing her leg and two fingers, but maintaining a positive attitude, saying “I’m not forgetting my other responsibilities and hopes and dreams and all that.” Paige Winter, 17, was attacked while swimming in waist-deep waters off the coast of North Carolina on June 2. She lost two fingers and her left leg was amputated.She has been undergoing several types of aggressive physical therapy every day, including mirror therapy, which she told ABC News’ Good Morning America is to help “reduce phantom pain in my leg.” Her physical therapists have told GMA that she is doing phenomenally well, though Winter says she’s “a little nervous about my hands and the therapy I have to do with them.””It’s going to be pretty rigorous,” she added, saying that she has been told she should have 95% function in her right one, but “I don’t know how much” in her left. Despite the injuries she sustained during the harrowing shark attack, Winter’s positive attitude has inspired many. “When I was in the water, I did not see my life pass before my eyes,” she said. “I saw my future flash before my eyes, and all the things I wanted to do, and that’s why I got out of there.” Her attitude after the shark bite and efforts to bring awareness to marine conservation even caught the eye of Ironman actor Robert Downey Jr., who sent her a special message inviting her to be a part of his new sustainability initiative. Winter says they are in regular contact now. “He said we are going to check in every so often and talk about what we’re going to do because I can tell he’s all for this,” she said. “He is all for helping the ocean.”Winter says she has received hundreds of cards and a gifts and bowls of candy from well-wishers. When she left Vidant Medical Center in Greenville, North Carolina, last week, there was even a small party celebrating her recovery. Her father, Charlie Winter, admits that there are still some tough times as she works towards her recovery.”It’s not so much a bad day she has … bad moments,” he said. “She has moments when she’s overwhelmed … but she’s got a really amazing uncanny ability to pick herself up.” The teen said she is also working to not forget her goals as she works towards a physical recovery. “The main focus right now is my therapy and my healing,” she said. “I’m not forgetting my other responsibilities and hopes and dreams and all that.” “I cannot change that I don’t have a leg, I can’t change that I cannot use my hands right now,” she said. “I can control what happens in the future, I can do that and that’s what I want to do.”

Hostess assaulted at NYC restaurant after asking Texas patrons for proof of COVID-19 vaccination
Angela Bassett is amazed by her Madame Tussauds wax figure: “Oh Lord! I’m a twin!”
Alaska once had the highest vaccination rate. Now it’s in a COVID-19 crisis.
‘Ted Lasso’? ‘WandaVision’? ‘Mare of Easttown’? Who will clean up on Sunday’s Emmy night?
How COVID-19 hybrid immunity could be a potential pandemic game-changer
Louisiana residents frustrated by FEMA aid process weeks after Hurricane Ida