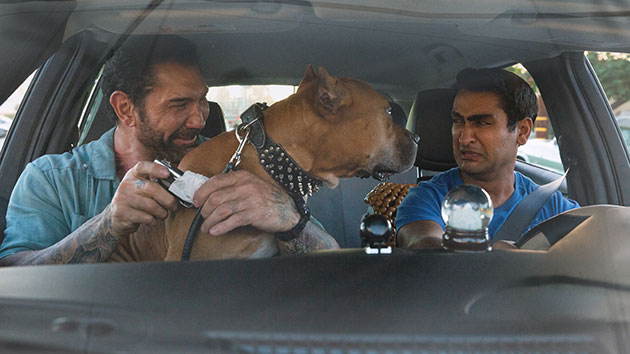 * Stuber — This action-comedy stars The Big Sick’s Kumail Nanjiani as an Uber driver named Stu, who’s in for “the rideshare of his life” after picking up a cop — played by Guardians of the Galaxy’s Dave Bautista — who’s hot on the trail of a killer. Natalie Morales and Mira Sorvino co-star. Rated R.

* Crawl — Sam Raimi, the filmmaker behind the Evil Dead series, produced this horror film about a father and daughter, played respectively by Barry Pepper and Kaya Scodelario, who find themselves trapped in a flooding house during a Category 5 hurricane and are hunted by alligators. Rated R.

* The Art of Self Defense — This dark comedy stars Jesse Eisenberg as a mild-mannered accountant who takes up karate as a means of self-defense after being attacked by a motorcycle gang. Also starring Alessandro Nivola and Imogen Poots. Rated R.

* The Farewell — Crazy Rich Asians and Oceans 8 star Awkwafina leads the cast of this dramedy about Chinese-American family who, upon learning their grandmother has been diagnosed with terminal lung cancer, decides not to keep her in the dark and schedules a family gathering before she passes. Rated PG.