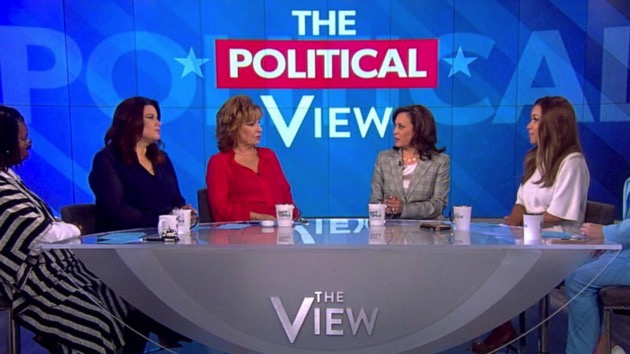 (NEW YORK) — Sen. Kamala Harris doubled down on her criticism of fellow 2020 hopeful Vice President Joe Biden and his remarks on busing in the first Democratic debate as a fundamental disagreement not “a personal conflict.””I have no intention of attacking Joe Biden but I am gong to point out our differences of opinion…Listen this is a presidential race …we’re on a debate stage and if you have not prepared and you’re not ready for someone to point out a difference of opinion….then you’re probably not ready,” Harris said on The View.Harris made her second appearance on The View on Friday, two weeks after the debate performance that sent her soaring into double digits in polls, placing her into the top tier of candidates.During that debate, roughly 18 million viewers watched Harris challenge Biden on his claims of working with segregationists and his stance against busing to integrate schools decades ago, telling a personal story of being bused.”It was not only that but you also worked with them to oppose busing. There was a little girl in California who was part of the second class to integrate her public schools. She was bused to school every day. That little girl was me,” Harris said.On The View, she once again brought up those concerns about how the nation’s history of desegregation and busing of black students to predominantly white schools and districts was being cast in the ongoing debate.”If I were serving in the United States Senate 40 years ago, when Joe Biden was serving we would have been on opposite sides,” she said.”At that time, we had people leading state houses, we had people holding very high positions of authority and power in our country who were dead set on segregation …That’s why Brown v Board of Education had to go to the United States Supreme Court. That’s why Earl Warren, because this issue was so important, if you read his history, he said, this is such a fundamental issue about fairness in our country, that it is critically important. The court is unanimous on this decision, because this should not be about politics. It is a core issue of what’s right in our country. And so – and why does it have to go to the United States Supreme Court because there was violence – and I’m not saying that word casually -violence to the desegregation of schools.”Harris, a former California attorney general and prosecutor, also weighed in on Labor Secretary Alex Acosta’s resignation amid controversy over his role in a 2008 plea deal with accused sex trafficker Jeffrey Epstein. Such cases, she said, are difficult to prosecute.”I personally prosecuted child sexual assault cases. And they are some of the most difficult cases to prosecute…The predator selects his prey in a way that is about vulnerable children…any prosecutor worth his salt knows this is the exact kind of case that is typical of somebody who’ preyed on children. And that case should go before a jury and that person should go to prison for a long period of time,” she said. “The thing I found so troubling, disheartening and really unbelievable was the way that Acosta has described the challenge…it’s like saying it’s really difficult to make an omelet…well then get out of the kitchen!”Harris’ campaign events in the next several days include stops in Atlantic City for the Omega Psi Phi Fraternity Leadership Conference, and then multiple events in New Hampshire and Iowa.Copyright © 2019, ABC Radio. All rights reserved.