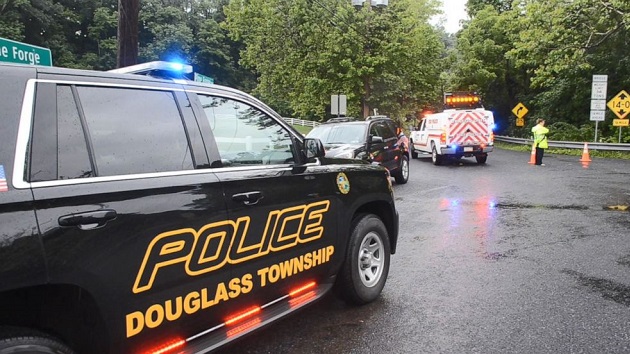 (PHILADELPHIA) — A pregnant woman and her 8-year-old son drowned after their car was washed away by floodwaters just outside of Philadelphia on Thursday. The two had been reported missing.The mother and son were found near Ironstone Creek, in Douglass Township, about 45 miles northwest of Philadelphia. The creek was one of many local streams that overflowed its banks as heavy rain moved through the region on Thursday.Boyertown, Pennsylvania, just a few miles west of Douglass Township, received 4.6 inches of rain on Thursday, according to the National Weather Service.”Tough evening for a local family and some local first responders this evening in Douglass (Berks),” the Douglass Township Constable’s Office posted on Facebook. “Tragedy struck and Mother Nature’s fury took away an expecting mother and child far too soon.”The expectant mother was in her 30s, according to Philadelphia ABC station WPVI-TV.”It came up pretty fast and I heard that there was a woman that was stuck in a car with a baby,” Phil Abbott, who lives in the area, said of the floodwaters. “It was up to the road and this [road] was covered here. … The guys were heading up by my barn and they said there was a woman stuck in a car with a baby. They weren’t sure if she was down at the corner or where she was.”Authorities from several neighboring towns responded, with a boat searching the swollen creek.The woman and child’s bodies were found late Thursday.Streets all over eastern Pennsylvania dealt with major flooding on Thursday. Many riders were stranded and in need of water rescues.Flash flood warnings were issued for most of southeast Pennsylvania and southern New Jersey as thunderstorms and heavy rain moved through the region. The highest rain totals, over 4 inches, were found in Berks County and Montgomery County.