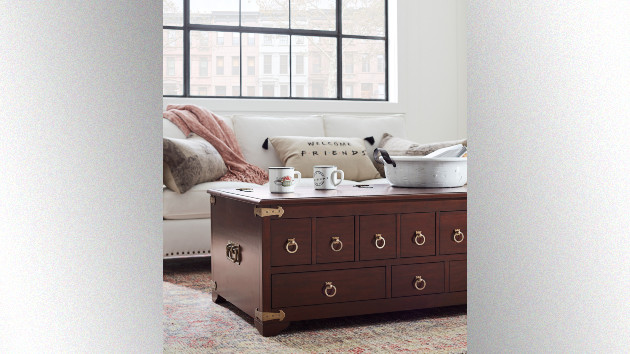 (LOS ANGELES) — Friends had a whole episode revolving around Pottery Barn – “The One with the Apothecary Table” – so in honor of the sitcom’s 25th anniversary, the furniture store is releasing an entire Friends-inspired collection.

The collection will include “Central Perk-worthy accents,” furniture, and, of course, an apothecary table. In the infamous season six episode, Rachel tries to convince Phoebe a Pottery Barn apothecary table is a one-of-a-kind antique after finding out that Phoebe hates Pottery Barn.

While the entire collection has not yet been revealed, a promotional photo for the line shows a Central Perk mug perched atop the apothecary table, in front of a couch with a pillow that reads, “Welcome Friends.”

According to Pottery Barn, the collection will be released on Tuesday, July 30 and prices will start at $12.50.

The store is also offering fans a chance to win a trip to Los Angeles, a Pottery Barn shopping spree and a tour of Warner Bros. Studios, where you’ll visit the Central Perk set.

Emmy Awards host Cedric the Entertainer says he’s committed to improving conditions for Black comedians
Tyra Banks defends Olivia Jade ahead of her ‘Dancing with the Stars’ debut: “Olivia is so brave”
Murdaugh murders and mysteries timeline: Key events in the South Carolina family’s scandals and deaths
Alaska once had the highest vaccination rate. Now it’s in a COVID-19 crisis.
Priyanka Chopra responds to growing criticism over ‘The Activist’: “The show got it wrong”
In theaters now: Gerard Butler and Frank Grillo in the “irreverent, explosive” ‘COPSHOP’