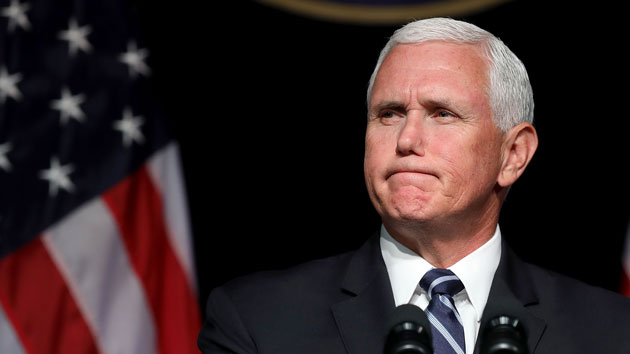 (MCALLEN, Texas) — Vice President Mike Pence declared the nation in crisis and blamed Democrats on Friday as he toured facilities at the U.S.-Mexico border packed with parents cradling their children and, in one room, dozens of adult men crammed in to a fenced-in pen that resembled a cage.The images, captured on video, offered a rare look inside border facilities at the center of a national debate on how the U.S. has handled a massive influx of refugees at its southern border.“Forty days,” one man told reporters using hand signals from behind the chain-linked fence, seeming to suggest that was how long he had been detained at the facility in McAllen, Texas.“We are not a terrorist,” said another.Flanked by Republican lawmakers, Pence’s visit to the border facilities in the Texas towns of Donna and McAllen was intended as a victory lap.After months of record-breaking numbers of undocumented migrants arriving at the border and crippling the government’s capacity to care for and house them, undocumented crossings dropped by 28% in June. The administration credits its agreement with Mexico, which stipulates among other conditions that Mexico will deploy its National Guard to crack down on the travelers moving north through the country from Central America.At the Donna facility — a giant tent complex 20 miles from McAllen, Texas – there were some children sleeping on mats on the floor, covering themselves with emergency foil blankets, while others sat on benches watching cartoons, some pulling up the younger children’s hooded sweatshirts due to the cold.“I’m Vice President Pence,” he said to one group of children. “This is Mrs. Pence. And these are various senators from around America.”When he asked through a translator whether the kids were comfortable and had enough food, the children nodded.”Where are you from?” Pence asked.”Ecuador,” one child replied. “Honduras,” another said.”How long did it take you to get here?” Pence asked.”Dos meses,” a girl replied, saying “two months” in Spanish.”Did you walk the whole way?” Pence asked.”Si,” a girl replied, meaning “yes.””That’s a long journey,” Pence replied.Sen. Mike Lee, a Spanish-speaking Utah Republican, told reporters that one migrant girl said she was worried she might not be able to pass through to the U.S.”But they’re taking good care of you here?” Pence asked. “Ok,” he said. “Gracias,” which means “thank you.” “God Bless you.”The brief exchange stood in sharp contrast with new first-hand accounts from migrant children in court records released this year by a California federal court.In those accounts, children told court-appointed lawyers of spending weeks in freezing temperatures and described border guards whom they claimed threatened them with prison if they tried to sneak any food from the facilities.“I have not been told how long I have to stay here,” a 5-year-old from Honduras told the lawyers. “I am frightened, scared and sad.”Others spoke about the freezing temperatures.”It is always cold in the cage,” a 17-year-old boy from Guatemala told the lawyers. “They took my (8-year-old) nephew’s clothes when we arrived at Ursula because they were wet, and gave him a T-shirt, which is not enough to keep him warm.”At one point, some 2,500 children deemed “unaccompanied” –- oftentimes kids traveling with an aunt, uncle or grandparent, which the government doesn’t recognize as a legal guardian — piled up at these border facilities as the government scrambled to find beds for them in longer-term shelters at the Department of Health and Human Services (HSS).But that number has since dropped to roughly 200, as HHS opened new shelters and expedited releases to sponsors.“This is very tough stuff,” Pence said at one point after encounters with the detainees.New York Democratic Rep. Alexandria Ocasio-Cortez accused the administration -– namely White House aide Stephen Miller of purposefully trying to be cruel to people without US passports.“It is a policy of dehumanization implemented by this executive administration, laid at the feet of Stephen Miller, that creates a tinderbox of violence and dehumanization where hurt people hurt people,” she said.Pence told reporters that he and President Donald Trump were ready to “roll up our sleeves” and get to work on legislative changes.The administration has asked Congress to allow it to detain families traveling with children past the 20-day limit ordered by the courts. Pence and others said this would serve as a deterrent to families seeking asylum in the U.S.Democrats counter that long-term detention of children is damaging and isn’t the solution.“If there’s one basic value that ought to unite us as Democrats and Republicans –- as Americans -– is how we treat children,” said Democratic Rep. Gerry Connolly of Virginia. “Their children, our children, it doesn’t matter.”Pence on Friday gave no indication that the administration was ready to negotiate, placing the blame for the border crisis squarely on Democrats.“We can fix this,” Pence later added. “The American people expect nothing less.” Copyright © 2019, ABC Radio. All rights reserved.