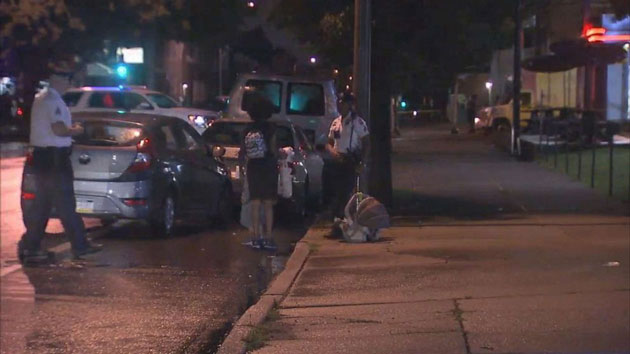 (PHILADELPHIA) — A 54-year-old man was beaten to death by crowd of onlookers in Philadelphia after he attempted to steal a car with three children inside but was stopped by the parents, police said.The man, who police identified as Eric Hood, hopped into the car and drove off while the parents of the kids were inside a store on Thursday around 9:50 p.m., according to a press release from the Philadelphia Police Department.However, he didn’t make it far.The mother and father, who also were not identified, managed to chase down the vehicle and remove Hood from inside at a red light, police said.The alleged carjacker assaulted the dad and fled, according to police, but was stopped by a larger crowd who kicked and punched him repeatedly. The assault continued until police arrived.The children in the car were not injured in the incident, police said.Hood was rushed to Temple University Hospital where he was pronounced dead.A nephew of Hood, who did not want to be named, told ABC News Friday that he had only just learned of his uncle’s death a few hours before.”I’m saddened that all this had to happen,” he said. “I’m sad that my uncle lost his life doing something that’s so out of character for him and for the kids, just going through it.””There’s no one that’s winning in this incident,” the nephew continued. “It’s tragic all around.”The nephew said that while his uncle struggled with alcohol and drug abuse, the alleged carjacking incident was a shock to the family.”He wasn’t in his his right mind,” he said. “That’s not the uncle I remember. This is just a shock.””Just jumping in somebody’s car with kids in the back?” the nephew added. “Who does that?”Police have not yet filed charges against the parents and are awaiting results from the Philadelphia’s medical examiner’s office to determine a cause of death.Copyright © 2019, ABC Radio. All rights reserved.

Britney Spears makes triumphant return to Instagram, but some fans think someone else is running the account
Biden to focus on ‘intensive diplomacy’ at UN amid tensions with allies
Republicans dig in on debt-limit standoff despite Democratic effort to mount pressure
‘Dancing with the Stars’ season 30 recap: JoJo Siwa’s historic first performance puts her atop leaderboard
Two victims identified in fatal motorcycle crash on Route 28
Kids in Business at the DuBois Mall this Saturday