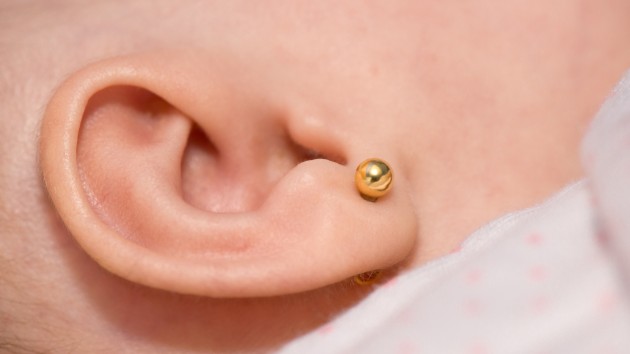 (NEW YORK) — A seemingly innocent moment Hilary Duff thought she was sharing with fans has ignited unexpected controversy on Instagram.The actress-singer recently posted a photo of herself holding her 8-month-old daughter, Banks, who appeared to have ears pierced.Duff’s prior posts show the child earring-free, which could be what caused the so-called mommy shaming against the mother of two.”We usually recommend the youngest being 3 months due to risk of infection from a process like piercing,” Dr. Julie Capiola, a pediatrician with Premier Pediatrics in New York, tells ABC News’ Good Morning America. “It’s a cultural or personal choice to whether or not parents want to pierce [their] child’s ears.”Some Instagram users gave Duff flack for her daughter’s studs, while most fans came to her defense.”They pierced my ears 2 days after I was born,” one follower said.”[Cause] you were not given a choice,” another replied. “It is dangerous [especially] when they get to toddler age and could pull [the] earring off and swallow it.””Can we maybe NOT permanently scar babies for no reason other than accessorizing them?” someone commented. “That would be great.”A fan chimed in with a different approach: “We love you Hilary, you’re doing amazing sweetie, please don’t let these internet trolls ruin your day.””Keep being the fabulous mother u are!” another said.Many people commented how they had their ears pierced as a newborn, but Capiola advises against it, adding how there’s a lower risk for infection after the appropriate vaccinations have been given to a child. Plus, the child’s immune system is stronger at 3 month old and after, Capiola said.Capiola says as long as they’re 3 months or older, ear piercing is OK for kids.Here are safety guidelines and more:

A sterile environment is advised

Capiola says a pediatrician’s office will be a safe, sterile environment — should they perform piercings. If you choose a jewelry store, make sure it is reputable and safe.

Capiola said sterling silver or 14-karat gold metals are nickel-free, which could cause an allergic reaction. Medical plastics are also an alternative, she says.

Use a screw back

If parents are fearful of earrings being a potential choking hazard, screw backs may be the wiser choice.

Will my child feel any pain?

There are nerve endings in the ear, so baby is likely to feel some pain.”It’s usually brief,” Capiola said.

Watch for signs for infection

Redness, swelling, fluid drainage or warmth on the ear are all signs of infection. If your child appears to be in pain, or has a fever (pain being a later sign of infection), call your physician.

The American Academy of Pediatrics says rubbing alcohol could minimize the chance of infections. Do not remove the earring for four-to-six weeks and gently rotate each day, the AAP states.”Follow the advice of the piercer or doctor for cleaning techniques,” added Capiola Copyright © 2019, ABC Radio. All rights reserved.