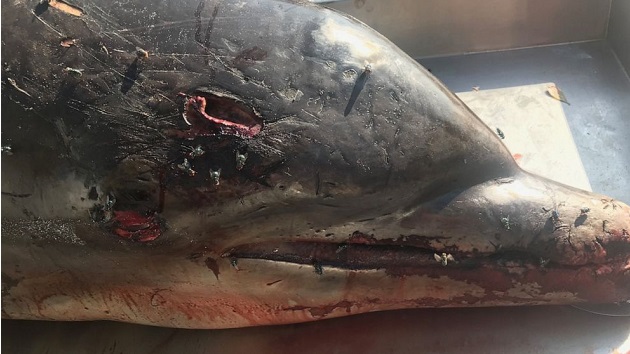 (NEW YORK) — A dead bottlenose dolphin recently found off the Florida coast appears to have been speared in the head, according to the National Oceanic and Atmospheric Administration.A close examination of the animal, recovered by the Florida Fish and Wildlife Conservation Commission at the end of May, showed that it had been impaled near its right eye, “extending almost 6 inches toward the top and back of the head,” according to NOAA. There’s evidence of hemorrhaging, indicating the animal was stabbed while alive.The dolphin was found along Upper Captiva Island in Lee County, approximately 20 miles west of Fort Myers, on Florida’s Gulf Coast.An adult male, the dolphin was known to area biologists and was last observed swimming near fishing boats, said NOAA, which is seeking information from anyone who may have details related to the incident.Agencies including NOAA are offering as much as $38,000 in rewards for information leading to the successful identification or prosecution of persons responsible.Since 2002, more than two dozen dolphins have been attacked with guns or arrows or otherwise impaled in the Gulf of Mexico, according to NOAA.Harassing, harming, killing or even feeding dolphins could result in a fine of up to $100,000 and a year in jail, per violation, under the 1972 Marine Mammal Protection Act. Copyright © 2019, ABC Radio. All rights reserved.