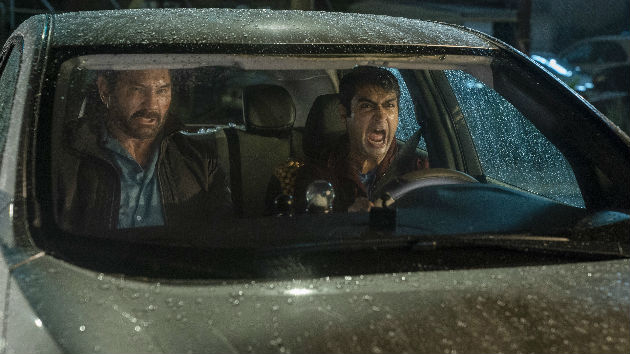 (NEW YORK) — Dave Bautista and Kumail Nanjiani buckle up for the ride of their lives in the new action-comedy Stuber, in theaters today.

Bautista plays Vic Manning, a tough LAPD cop who hires a mild-mannered Uber driver named Stu, played by Nanjiani, to drive him around as he hunts down a notorious drug lord. The two are an unlikely duo, but it was their chemistry that ultimately convinced Bautista to take the role.

“I really want to conquer every genre,” Bautista tells ABC Radio. “…I read the script and just found myself laughing out loud! I just thought it was good. I could see myself playing this part, I could see Kumail playing Stu. Then after the chemistry read, is what sealed the deal for me.”

Bautista gave viewers a taste of his comedic chops as Drax in the Guardians of the Galaxy franchise, and he gets to explore that even more in this film. Nanjiani says Bautista is “funnier than he thinks he is.”

“Every single take was great, and he was very good at improvising, and when we would yell ‘Cut!’ he was like, ‘Well, that wasn’t good,’” Nanjiani recalls.  “I’m like, ‘Dude, what are you talking about? That was great!’”

“Not to really be that character,” Bautista explains, “but take away his saltiness and his surliness and how he was just kind of grouchy, just didn’t like anybody, but his job — he was kind of obsessed with his job!”