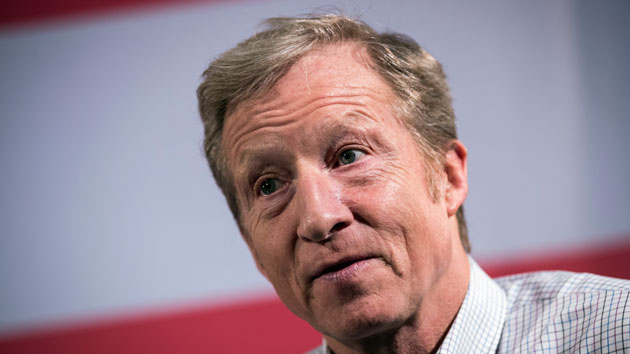 (WASHINGTON) — Just days after launching his bid for the 2020 race, Tom Steyer now hits the trail running.The billionaire liberal activist jumped into the race with a video announcement Tuesday, followed quickly by two television ads set to run for the next two weeks in key primary states – Iowa, New Hampshire, South Carolina, and Nevada.He kicked off his campaign in South Carolina, meeting with education leaders Friday morning at Burke High School in Charleston, followed by a lunch roundtable with black leadership at a restaurant known for its Southern seafood specialties like crab rice and shark steak.Steyer, who has poured millions of his own money into electing Democrats throughout the years, said in January that he would not seek the Democratic presidential nomination in 2020, instead saying he would redouble his efforts to impeach President Donald Trump. Now he’s reversed course, and will take his pitch as a Washington outsider who can ‘push power down to the people’ – restoring democracy and fixing the system from an independent vantage point.The former hedge fund investor joins the crowded field with less than a week before the qualifying deadline for the second Democratic debates in Detroit at the end of this month. To land on a debate stage, he will need to cross the 65,000 donor mark or garner 1 percent in at least three polls, but both appear unlikely in such a short time frame. In his first national television network interview, he conceded that making it to the July debate is unlikely because “I’m just too late” but is “going to take very seriously” getting on stage in September.