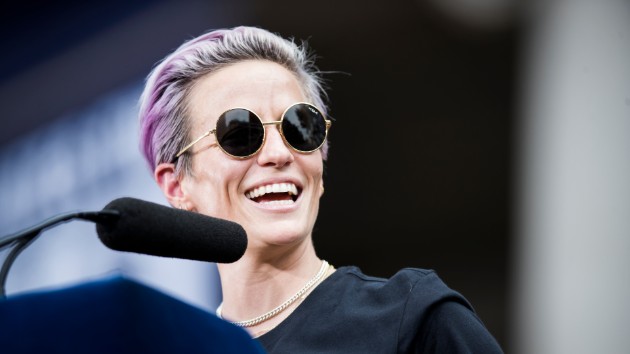 (NEW YORK) — U.S. women soccer team co-captain Megan Rapinoe, who is publicly feuding with President Donald Trump, confirmed on Tuesday night that the World Cup champs have not been invited to the White House, but that the team has accepted invitations from lawmakers to visit the U.S. Capitol. Rapinoe, the team’s top scorer and an outspoken activist for civil rights, declared before her team’s historic win that she would boycott a potential White House visit and told CNN on Tuesday that “every teammate that I’ve talked to explicitly about it would not go.” “I don’t think anyone on the team has any interest in lending the platform that we’ve worked so hard to build, and the things that we fight for, and the way that we live our life — I don’t think that we want that to be co-opted or corrupted by this administration,” she said.So far, there is no word from the White House on whether the team will receive an invitation.But the women’s soccer team did receive invitations to Washington by Democratic Rep. Alexandria Ocasio-Cortez, Senate Minority Leader Chuck Schumer and House Speaker Nancy Pelosi, along with a bipartisan group of House members and was honored by New York City Mayor Bill de Blasio at a ticker-tape parade on Wednesday.”This is my charge to everyone: we have to be better,” Rapinoe said during the parade. “We have to love more, hate less. We gotta listen more and talk less. We gotta know that this is everybody’s responsibility.”Trump congratulated the U.S. women’s soccer team for their historic World Cup win against the Netherlands on Sunday and tweeted last month that he is planning on inviting the team to the White House, “win or lose.”But amid a public feud with Rapinoe, Trump appeared less certain about the invitation when talking to reporters on Sunday.”We haven’t really thought about it,” he said. “We’ll look at that.”Asked if she has a message for Trump, Rapinoe echoed a sentiment expressed by other athletes, including NBA star LeBron James who feuded with Trump in 2018, calling the president “divisive.””I think that I would say that your message is excluding people. You’re excluding me, you’re excluding people that look like me, you’re excluding people of color, you’re excluding — you know — Americans that maybe support you,” Rapinoe said and then she criticized Trump’s 2016 campaign slogan, “Make America Great Again.””I think that you are harking back to an era that was not great for everyone. It might have been great for a few people, maybe America is great for a few people right now but it’s not great for enough Americans in this world and I think that we have a responsibility — each and every one of us, you have an incredible responsibility as — you know — the chief of this country to take care of every single person and you need to do better for everyone,” she said.Rapinoe, who has been an outspoken critic of the Trump administration, was one of the first athletes to follow then-NFL quarterback Colin Kaepernick’s lead in September 2016 by taking a knee during the playing of the national anthem to protest racial oppression and police brutality against black people.She drew Trump’s ire last month when previous comments she made surfaced that she’s “not going to the f—— White House” if her team wins.Trump slammed Rapinoe on Twitter last month after she claimed that “leagues and teams love coming to the White House,” but since Trump took office, the president has feuded with a wide variety of sports champs — from football to basketball and baseball — and many players refused invitations to the White House, citing their opposition to Trump.”Megan should never disrespect our Country, the White House, or our Flag, especially since so much has been done for her & the team. Be proud of the Flag that you wear. The USA is doing GREAT!” Trump wrote in a series of tweets.The Trump administration has so far hosted only one women’s sports team at the White House — the Baylor University Lady Bears — and has not invited any of the WNBA champions since Trump took office. Copyright © 2019, ABC Radio. All rights reserved.