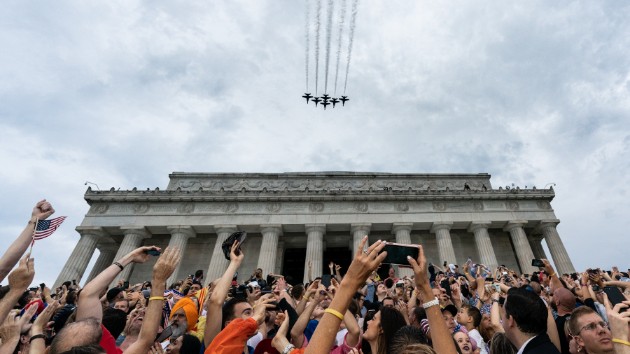 (WASHINGTON) — President Donald Trump’s Fourth of July celebration last week cost the federal government and Washington, D.C., $5.35 million, according to an Interior Department letter released exclusively to ABC News. The Interior Department and National Park Service spent $2.45 million on staffing, medical services, barricades, and other logistics for the event, called Salute to America, which does not include the cost of other Fourth of July events like the Capitol Fourth concert. The city of Washington, D.C., and Department of Defense said the Salute to America event and security cost $1.7 million and $1.2 million respectively, bringing the total cost of the event to $5.35 million.National Park Service Deputy Director Dan Smith, who is serving in the director capacity, said the spending was worth it for the exposure it generated for the National Park Service and educational value of an event focused on American history and the contributions of military service members and families.“If you could tell me that for $2.5 million additional dollars the exposure we got from this televised event, it’s a great bang for the buck,” he told ABC News.But a top Democrat and advocates for preserving national parks said the use of the money is offensive and takes taxpayer money out of a fund that usually pays to improve and protect parks around the country.The total cost of Salute to America does not include the $750,000 value of donated fireworks or the cost of military flyovers, which the Pentagon said came out of the individual military service’s training budgets. It also does not include the cost of the Capitol Fourth concert, which is part of a concert series that is included in the National Park Service budget every year. The concert this year cost about $3.8 million, a small increase from previous years.The Washington Post first reported that the National Park Service, which handles events on the National Mall, could pull up to $2.5 million from accounts typically used to pay for park improvements around the country to pay for the event.Smith said the money for Salute to America did not take away from any planned maintenance projects or deferred maintenance because it came from a fund intended for parks that don’t collect fees. The park service also used money from the Centennial Challenge Fund, which is appropriated by congress to match donations from non-profits and outside groups to improve parks.About 117 locations in the National Park Service generate money from entrance and recreation fees. The largest and most popular parks keep 80% of that money to pay for improvements and visitor services in the park, sending the remaining 20% into a fund for other parks to pull from.At the time the money was taken out for Salute to America, Smith said that fund had about $34 million. He also said the spending was in line with how the park service has used money from fees under other administrations.In a letter to Rep. Raul Grijalva, D-Ariz.,chairman of the House committee that oversees the Interior Department, Secretary David Bernhardt said the park service has used the money from recreation fees in the past for celebratory events on the National Mall, including $3.4 million for multiple events during the National Park Service’s centennial celebration in 2016 and several hundred thousand dollars for events on the National Mall, including the re-dedication of the Lincoln Memorial in 2009 and the celebration of the March on Washington in 2013.Democrats and advocacy groups decried the additional costs for the event, saying the National Park Service is already underfunded and can’t afford to redirect money needed to address a nearly $12 billion maintenance backlog.Grijalva called the spending “especially wrong” and said the event did not have the same historical value as the other examples cited in the letter.”Mayor Bowser has said the president’s event bankrupted a fund meant to protect the nation’s capital from terrorist attacks, not to mention that he still hasn’t paid off the bills from his inauguration festivities. In that context, the diversion of fee revenue from visitors to our national parks to pay for the president’s new extra event on the 4th was especially wrong,” he said in a statement.”Secretary Bernhardt says fee revenue has been used in the past to celebrate President Lincoln, the anniversary of March on Washington, and the 100th Anniversary of the National Park Service. This time, visitor fee revenue was diverted to celebrate President Trump. Does the secretary really not see the difference?” the statement added.Kristen Brengel, vice president of government affairs for the National Parks Conservation Association, said the department’s defense of the spending is offensive to people who lobby to protect every cent in the park service budget, comparing it to robbing money out of a kid’s piggy bank.”The fact that they’re heading in this direction for considering any money for the parks as a slush fund is offensive, it shouldn’t be done,” she told ABC News.Top Democratic senators on committees that oversee the Interior Department budget have asked the Government Accountability Office to look into whether there was any improper spending for the Salute to America celebration last week. Members of Congress had asked the Interior Department to provide details about the costs but say they weren’t given any information about the estimated cost of the event.Watchdog groups like the National Parks Conservation Association have already asked the Department of Interior’s inspector general to look at the department’s decision to use up to $2.5 million in fees collected from other parks to pay for the event. GAO is already looking at the use of fees during the government shutdown.Copyright © 2019, ABC Radio. All rights reserved.