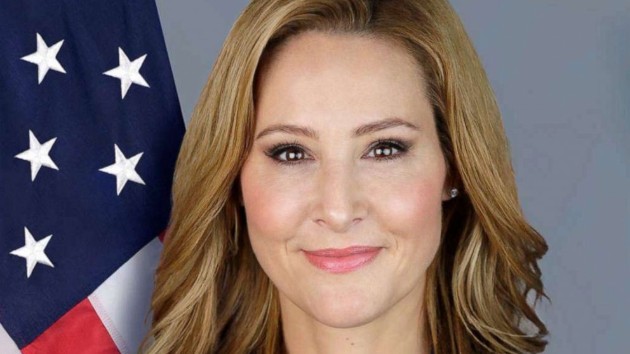 (WASHINGTON) — The senior Trump administration official leading U.S. government efforts to counter disinformation campaigns from Russia and other foreign adversaries appeared momentarily stumped by a question posed to her at a House Appropriations Committee hearing on Wednesday.Rep. Lois Frankel, D-Fla., wanted Lea Gabrielle, a top State Department official, to describe an example — any example from anywhere in the world — of Russian disinformation. At first, Gabrielle shifted in her chair, then she offered a drawn-out “um” without offering an answer.But Gabrielle couldn’t initially come up with an example.Gabrielle and two other government officials were testifying before the House Appropriations Committee in a hearing titled, “United States Efforts to Counter Russian Disinformation and Malign Influence.””It is clear that the Kremlin has been attempting to damage America’s credibility among our allies and our partners, undermine trans-Atlantic unity, and to sow discord in target societies,” Gabrielle testified. “They covertly plant false stories.”When it was time for Democrat Frankel to ask questions, the congresswoman wondered whether Russia utilized President Donald Trump’s public statements in its propaganda campaigns, and she wanted to know “specifically” what Russia’s disinformation operations entail.”What are the tales that they are telling, their fake news. What do you see?” Frankel asked Gabrielle. “Give me a couple of examples of fake stories. Because we’ve been talking in generalities, I’d like to know what kind of information they’re spreading. What are they saying, for example?”Gabrielle responded: “Well, it really depends on the country.”Frankel interrupted: “Well, just give me an example. Pick a country and give me an example.””Um,” Gabrielle said, before tapping her hand on the table and sitting silently for a few seconds.”Anybody can help her,” Frankel jumped in.One of the other officials testifying, John Lansing, the CEO of the United States Agency for Global Media — who was sitting beside Gabrielle — declared, “I’ll help her.”He noted that when Malaysian Airlines Flight 17 was shot down over eastern Ukraine in 2014, killing nearly 300 passengers and crew members, the “Russian narrative” was that it was part of an American conspiracy to malign Russia.By the time Lansing finished his answer, Gabrielle had found in her notebook a list of incidents and issues that were ultimately exploited by the Russian government.”The poisoning of U.K. citizens in Salisbury, England; energy development and distribution; NATO exercises and deployments; the crisis in Venezuela; and countless other topics,” she told Frankel.In February, Gabrielle — a former Fox News correspondent, Navy fighter pilot and military intelligence officer — was tapped to become special envoy and coordinator of the State Department’s Global Engagement Center, which organizes federal efforts to counter propaganda and disinformation from foreign governments and international terrorist groups.During the hearing on Wednesday, Lansing said Gabrielle “doesn’t need help, she’s done a great job.”The State Department did not immediately respond to a request seeking comment for this article. Copyright © 2019, ABC Radio. All rights reserved.

Over 200 companies pledge net-zero emissions by 2040 as pressure on private sector mounts
Biden administration to ease restrictions on travelers to US in November
Biden had slow adjustment to ‘cold’ White House, new book claims
What we know about the Surfside condo collapse
Pediatricians with kids speak out about delta surge fears
Angela Bassett is amazed by her Madame Tussauds wax figure: “Oh Lord! I’m a twin!”