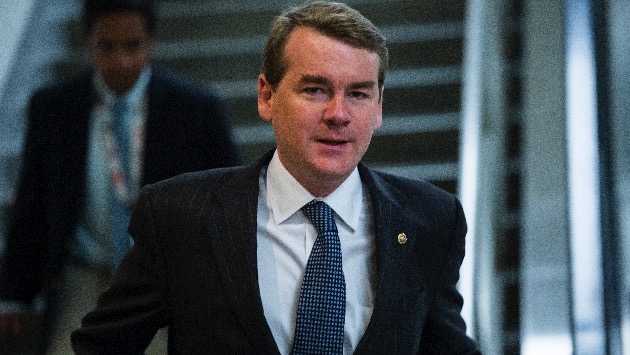 (NEW YORK) — Colorado Sen. Michael Bennet said Thursday that despite his low standing in most polls of the 2020 race, the campaign is still in it’s “early days” and he has ample time to break through a crowded field.”This is early days, and I think I’ve got different experience than everybody else in the race. I’ve won two really tough races in a swing state in Colorado…no one else could say that,” Bennet said on ABC’s The View.Bennet, who got into the race late after he was diagnosed with prostate cancer in April, said his experience gave him a new perspective into the importance of providing health insurance to all Americans.”The most abiding thing that I came out of that experience with was the knowledge that — I found out I had prostate cancer because of the screening that I was able to get because I have primary care, because I had insurance,” Bennet said.Bennet, who drew a sharp contrast with Vermont Sen. Bernie Sanders on the issue of healthcare during last month’s Democratic primary debate, also took another swipe at Sanders Thursday over the issue of student loan debt.“It is not to forgive it as Bernie has said. We need to lower the cost of college, that’s the most important thing and make it easier for people who have the debt to repay their debt. But forgiving it — that’s not a progressive policy, that’s an effort, by him, I think to get votes,” Bennet said.On Trump’s immigration policies, Bennet’s perspective, however, was mostly on par with his Democratic colleagues, but he drew a contrast on the issue of decriminalizing illegal crossings at the U.S.-Mexico border.”I learned something from John McCain, if I might say so, who was a border senator, he and Jeff Flake were on the Gang of Eight,” Bennet said, touting his work with a bipartisan group of senators in 2013, who were able to pass comprehensive immigration reform through the Senate, before it eventually stalled in the U.S. House, “I know what’s required for Republicans in the center of the country or on the border to be able to sell immigration reform in this country, and one of those things is a secure border. That should be true for Democrats as well. Democrats want a secure border as well, we just want a commitment to our rule of law and a commitment to our history as a nation of immigrants.”In an interview backstage following his appearance, Bennet expanded on why he opposes decriminalizing border crossings, something proposed by former Housing and Urban Development Secretary and 2020 contender Julián Castro.“What we shouldn’t do is conflate the refugee crisis that we’re having with the immigration laws, the country that we have to fix,” Bennet said. “We need to address this refugee crisis by working with the region to provide leadership to ensure that all of us are doing our part to make sure that refugees are treated humanely.”The Colorado senator was also asked about his stand on reparations for Americans the descendants of African slaves, to which he said he supports a bill in the U.S. House to study the issue and stressed the need to address systemic racism in the U.S. that has persisted far beyond slavery.”I’ve supported the bill to study reparations in the House, because I think there are distinct issues relating particularly to African American people in this country,” Bennet said. “There’s a straight line that you can draw from slavery, through Jim Crow through the red lining and the banking and housing to mass incarceration today. And I think it’s important as somebody who’s been a school superintendent, it’s important that we face those facts.”Bennet who was appointed to his Senate seat in 2009 and has subsequently won two tight re-election races in the swing state of Colorado, has struggled to break through the crowded field of Democrats vying for the party’s presidential nomination.Last week his campaign announced that the senator raised $2.8 million since announcing his candidacy on May 2, a sum that puts him far behind other top contenders like Sanders, former Vice President Joe Biden and South Bend, Indiana Mayor Pete Buttitigeg, who raised $24.8 million in the second quarter of 2019, the high-water mark for the field.But Bennet has insisted that through an aggressive campaign schedule and multiple nationally-televised debates, he has ample opportunity to introduce himself to the American public and draw a stark contrast to his Democratic rivals.Indeed, in the first Democratic primary debate Bennet also sparred multiple times with Sanders over the issue of healthcare, arguing that the Vermont senator’s plan that would eliminate private health insurance and move all Americans to a government-run system is unrealistic.”When Senator Sanders says that Canada is single-payer, there are 35 million people in Canada. There are 330 million people in the United States,” Bennet, who has proposed a plan that includes a public healthcare option for Americans to opt into in lieu of private insurance, said during last month’s debate in Miami, Florida.”We need to get to universal health care. I believe the way to do that is by finishing the work we started with Obamacare and creating a public option so that every family and every person in America can make a choice for their family,” Bennet argued.Bennet will head back to the early voting state of Iowa this weekend for a multi-day campaign swing, including a stop alongside nearly a dozen other presidential candidates at the Progress Iowa Corn Feed in Cedar Rapids.Copyright © 2019, ABC Radio. All rights reserved.