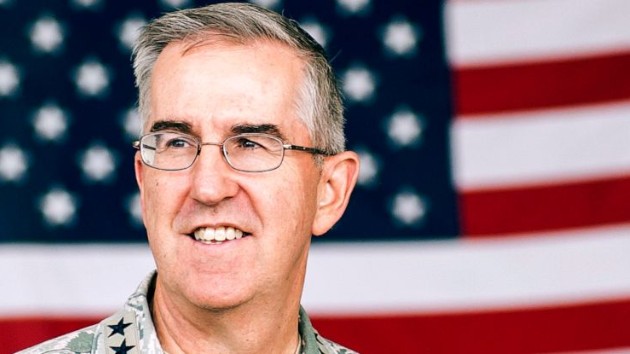 (WASHINGTON) — Gen. John Hyten, the nominee to be the next vice chairman of the Joint Chiefs of Staff, was cleared this week of allegations of abusive sexual contact that were made by a female service member in 2017 and 2018, according to a senior military official.However, it remains unclear if the U.S. Air Force general will be confirmed by the Senate as the nation’s number two military officer in time to succeed Gen. Paul Selva, who will retire from the position at the end of July. “After a comprehensive investigation by the Air Force Office of Special Investigations, there was insufficient evidence to support any finding of misconduct on the part of Gen. Hyten. Gen. Hyten cooperated with the investigation,” said Col. DeDe Halfhil, a Pentagon spokesperson. “With more than 38 years of service to our Nation, Gen. Hyten has proven himself to be a principled and dedicated patriot.”Hyten was nominated by President Donald Trump in early April to be the next vice chairman of the Joint Chiefs of Staff. He is currently serving as the commander of U.S. Strategic Command, where he has been assigned since November 2016.Following Hyten’s nomination, a female service member stepped forward and made allegations that he had engaged in abusive sexual contact with her on nine occasions during 2017 and 2018 while he was serving as the commander, said a senior military official.Abusive sexual contact is described as being unwanted hugging, kissing or inappropriate touching above the uniform.The Air Force’s Office of Special Investigations (OSI) was tasked with investigating the criminal allegations Hyten because he is an Air Force officer.Gen. James “Mike” Holmes, the commander of the U.S. Air Force’s Air Combat Command was assigned as the convening authority who would review the OSI’s investigation and hand down any punishments, if the allegations of wrongdoing were proven.The OSI investigators conducted interviews with staffers and reviewed emails but did not find anything more than what the service member had alleged, said the senior military official.The investigators informed the service member’s counsel of their initial conclusions, who in turn provided additional names and emails they said could substantiate the allegations. But a further investigation of that new information did not find any substantiating evidence, said the official.Holmes finished his review of their findings earlier this week and concluded that there was insufficient evidence to support the allegations.The Senate Armed Services Committee was notified on Wednesday about the investigation’s findings by Lt. Gen. Sami Said, the Air Force Inspector General.Though Hyten was nominated in April, the committee had yet to schedule a confirmation hearing even though Selva will be retiring on July 31. By law Selva is required to step down from the position of vice chairman of the Joint Chiefs of Staff when his four-year term ends on July 31.On Thursday the committee will hold a confirmation hearing for Army Gen. Mark Milley to be the next chairman of the Joint Chiefs of Staff.Earlier this week, another high-ranking officer set to join the Joint Chiefs of Staff announced his retirement because of his association with a former Navy public affairs officer investigated two years ago for inappropriate conduct. Though that officer was cleared and allowed to retire, Navy Secretary Richard Spencer said Adm. William Moran’s continued contact with the officer had led him to question his judgment.Confirmed by the Senate to be the chief of Naval Operations, Moran was to have assumed the job as the Navy’s top admiral on Aug. 1. Instead, Adm. John Richardson will remain in the post until another officer is confirmed to succeed him. Copyright © 2019, ABC Radio. All rights reserved.

Army Gen. Mark Milley was ‘not going rogue’ in secret calls to China, authors of new book claim
Biden administration to ease restrictions on travelers to US in November
23-year-old woman uses TikTok to highlight influential Latinas
Police say search of preserve ‘exhausted’ for Gabby Petito’s boyfriend: Live updates
Traveling over the holidays? Here’s how to stay safe from COVID-19
‘Shang-Chi and the Legend of the Ten Rings’ three-peats at #1 with $21 million weekend