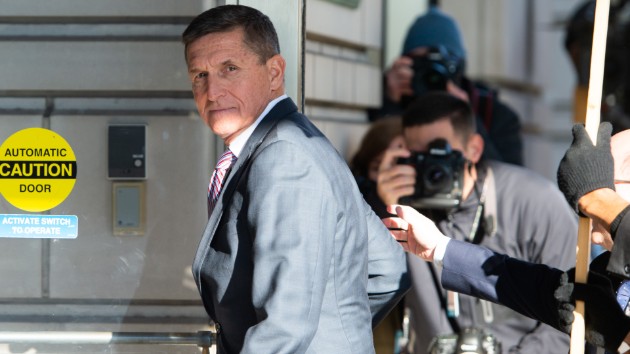 (WASHINGTON) — The fate of President Donald Trump’s former national security adviser Michael Flynn was thrown into legal limbo on Wednesday as federal prosecutors expressed new doubts about his pledge to cooperate with their investigative efforts — a core condition of Flynn’s plea agreement on charges he lied to the FBI during the Russia probe. Flynn’s cooperation in special counsel Robert Mueller’s investigation into Russia’s meddling in the 2016 election had led prosecutors to initially recommend he be spared from prison time. But his sentencing was postponed in December, and U.S. District Judge Emmett Sullivan said he wanted to evaluate Flynn’s assistance in other related cases. Now, as one of those cases nears trial, prosecutors are expressing new doubts about Flynn’s pledges of assistance.In a series of dramatic moves, federal prosecutors withdrew Flynn’s name from the list of witnesses in the upcoming trial of his former lobbying partner, Bijan Kian, who’s accused of concealing from federal authorities his lobbying activities benefiting the government of Turkey. And prosecutors identified Flynn as an unindicted co-conspirator in the case.On Tuesday, Sullivan asked in a court order how the switch from cooperating witness to conspirator in that case could impact Mueller’s position that Flynn should be spared prison time. The prosecutors in Flynn’s case declined to speculate, saying they wanted to postpone their assessment until Kian’s trial has unfolded.The simmering dispute over Flynn’s cooperation spilled into public view this week after federal prosecutors had said for months that Flynn would be a star government witness in the Kian case. However, prosecutors said this week they no longer considered Flynn’s testimony reliable because he changed his earlier account of how inaccurate information wound up in the 2017 lobbying disclosure forms he signed. In his new version, they said, Flynn blamed his lawyers for the omissions.Prosecutors informed Flynn’s new lawyer, Sidney Powell, on Monday that they had reversed course and decided to name Flynn as an unindicted co-conspirator in the case in a July 3 filing.

The decision apparently surprised Flynn and Powell, a confidant told ABC News. And Flynn’s counsel protested the government’s move in court filings, saying the prosecutors’ previous position “could not have been more deliberate or clear.”Flynn’s legal team disputed the suggestion that Flynn changed his story. They said Flynn merely clarified that he had signed lobbying statements containing false information because he trusted his former lawyers, who are experts on such disclosure laws.”General Flynn is still cooperating with the government even if they don’t call him as a witness,” Powell told ABC News in a statement.Kian, whose full name is Bijan Rafiekian, is charged with illegally lobbying in support of persistent efforts by Turkey’s president to regain custody of a cleric he blames for fomenting an unsuccessful coup attempt.Kian has pleaded not guilty in the case. Flynn was not named a defendant in the case but has been a central figure in the alleged illegal lobbying operation and was anticipated to serve as a key witness in the case until recently.Copyright © 2019, ABC Radio. All rights reserved.