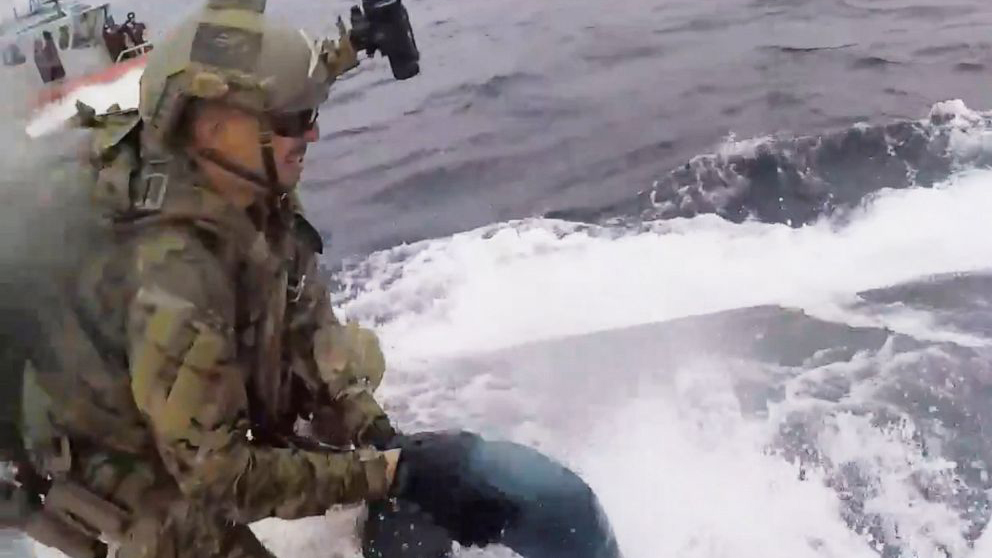 (NEW YORK) — Dramatic video shows a U.S. Coast Guard cutter, the Munro, pursuing a speeding semi-submersible suspected drug-smuggling vessel in the middle of international waters in the eastern Pacific Ocean.In footage taken on June 18, a Coast Guard crew member repeatedly shouts “Stop the boat!” in Spanish at the submersible.The crew member — a member part of a Coast Guard law enforcement detachment — calls out, “It’s going to be hard to get on.”One of two Coast Guard boats seen in the video then closes in on the submersible, as two crew members jump on top of it. One of the crew members makes his way to the hatch, pounding on it until an unidentified individual opens it.The video ends there.Marine patrol aircraft first spotted the submersible and communicated its location to the Munro, Coast Guard spokesperson Lt. Cmdr. Stephen Brickey told ABC News.The cutter then launched a helicopter beyond the line of sight of the submersible, and directed the two smaller boats to its location.The 45-foot-long submersible was traveling around 10 miles per hour “hundreds of miles off the Ecuadorian/Colombian border,” Brickey said.The team that boarded the submersible specializes in high-risk boarding and was armed with night vision to see into the submersible’s dark hatch.Five individuals were on board the vessel, and the Coast Guard seized around 17,000 pounds of cocaine worth an estimated $232 million, the spokesperson said.The use of semi-submersible vessels for drug smuggling is rare, as they are costly to build, according to the Coast Guard.From May through July, the Coast Guard said that three of its cutters have seized more than 39,000 pounds of cocaine and 933 pounds of marijuana through 14 separate drug busts off the coasts of Mexico, Central and South America.