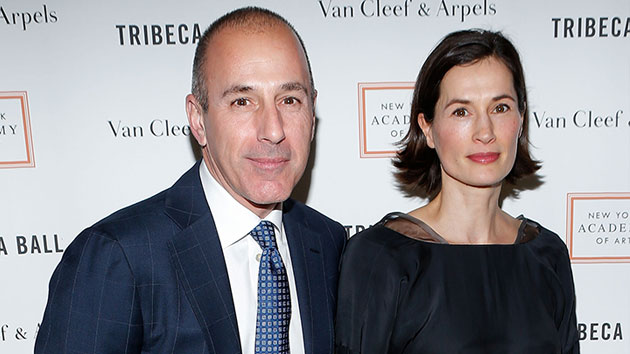 (NEW YORK) — Matt Lauer and his wife Annette Roque’s 20-year marriage is over.

“The case, which is an uncontested matrimonial, was filed on July 9th in State Supreme Court in Suffolk County, New York and is awaiting judicial review of the agreement,” says Chalfen. “Upon a judge’s signature, it will be sent to the court clerk’s office to be entered. The process could take up to a few months.”

“The matter has been settled,” Roque’s attorney, John Teitler, told the magazine.

Lauer was previously married to television producer Nancy Alspaugh from 1981-88.

A fixture on the Today show for two decades, Lauer was abruptly fired by NBC News in November of 2017 for alleged inappropriate sexual behavior in the workplace.

Following the termination, Lauer expressed his regret in a statement, saying in part, “Some of what is being said about me is untrue or mischaracterized, but there is enough truth in these stories to make me feel embarrassed and ashamed.”

Democrats lash out at Biden administration over handling of Haitian migrants
Mom dying of ovarian cancer shares what she wants women to know about the deadly disease
First ‘SNL’ guests of the season: Owen Wilson, Kim Kardashian West, Rami Malek, and Jason Sudeikis
“No one is safe. Not one of you.”: Johnny Depp decries ‘cancel culture’
Ray J responds to rumors of a second sex tape with Kim Kardashian: “This ain’t cool”
Tonight on ABC: ‘The Wonder Years’