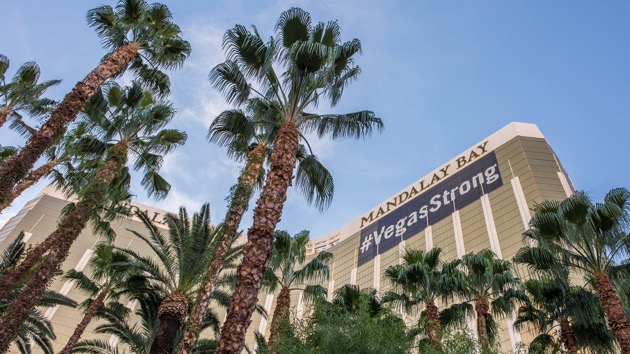 (LAS VEGAS) — A new report detailing the handling of the deadliest mass shooting in modern U.S. history found a number of ways in which fellow law enforcement agencies may be able to improve upon their own future responses to their own active shooter and mass casualty incidents.Nearly two years after the shooting at a music festival in Las Vegas that left 58 victims dead, the city’s police department released their definitive review of the incident.”In our chosen profession of policing, we often cannot control what takes place on the ground that we have been commissioned to protect and serve,” Las Vegas Metropolitan Police Department (LVMPD) sheriff Joe Lombardo wrote at the beginning of the report. “However, we always have control over how we respond in the aftermath.”The 158-page report gives a minute-by-minute account of the attack and the police response, while also illuminating new details of the chaos that unfolded on the ground that night.Fleeing, confused concertgoers warned police of “an older suspicious white male, wearing dark fatigues and a black backpack, who they thought might have been an additional shooter,” according to the report.After seeing that man enter a nearby RV, a strike team responded, according to the report, addressing the man in the RV and realizing then “he was not a threat but rather a survivor of the incident.”That incident was just one of a spectrum of necessary distractions police faced. For nearly three hours after the attack, police dispatch continued fielding frightening new reports of “active shooters” and “shots fired.”The analysis includes 93 recommendations for law enforcement officials, including increased training and practice drills, the reinforcement of existing protocols, and recommended placement of incident command posts and multi-agency coordination centers.One recommendation, for instance, calls for expanded active-shooter training “to include a barricaded active shooter when the shooter is in a position of advantage.”Another recommendation, number 45, was born out of decision by the LVMPD — under relentless and extraordinary pressure for information from a terrified public — to release a preliminary timeline in the early hours after the shooting rather than waiting for all evidence to be collected.”In hindsight, the rush to put out information led not only to confusion but also to the birth of multiple conspiracy theories that continue to plague this mass shooting today,” the report concluded.As a result, another recommendation calls for more precise phrasing to be used — like “sequence of events” and “preliminary details” — to “ensure accuracy while maintaining a commitment to transparency.”In addition to the chaos and confusion, the report also highlights moving moments of unity and compassion.The LVMPD report describes its own officers’ response as “extremely compassionate, supportive, and helpful to those in need,” and that the concession stands gave survivors food and water, and good Samaritans “dropped off cell phone chargers, food, water, and blankets.”Some heartbreaking new details are included in the report as well.Elsewhere, the report describes how some victims and survivors who had gathered at an arena on the campus of University of Nevada – Las Vegas, but “as the sun came up, survivors reported that they did not want to leave… because they felt safe where they were and did not know what to do next.”At the conclusion of the report, the authors acknowledge how first responders “have a difficult and heavily scrutinized profession.”They praised the work of the Las Vegas Metropolitan Police Department but added that “it is apparent to us as an agency that there are many areas where we must improve.”And they hope they aren’t the only ones, teeing up this report as a possible guide that can “provide insight and drive positive change for first-responder agencies across the world.”Copyright © 2019, ABC Radio. All rights reserved.