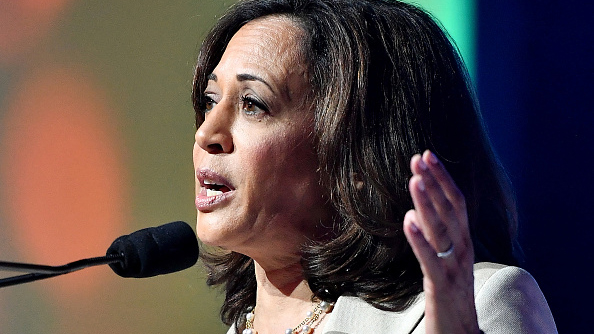 (WASHINGTON) — 2020 presidential candidate Sen. Kamala Harris on Thursday took fresh aim at former Vice President Joe Biden over his remarks on busing in the first Democratic debate, calling his efforts to explain “revisionist history.”“I’m not going to let us engage on a debate stage for who’s going to be the next president of the United States — I’m not going to allow us to engage in revisionist history,” Harris said in a taping of the popular New York-based syndicated radio program “The Breakfast Club” set to air Friday morning.“I can’t stand on that stage and allow certain conversations to be taking place,” Harris told the radio hosts.Harris and Biden have been trading barbs for two weeks, following the heated moment during the debate. Their dispute has continued to be personal with Harris making up t-shirts using a photo of her as a young girl in California who was bused and Biden invoking the name of his deceased son Beau, who knew Harris when both served as state attorneys general.”I was prepared for them to come after me, but I wasn’t prepared for the person coming at me the way she came out,” Biden said during an interview aired on CNN’s “New Day” program. “She knew Beau and knows me.”Shortly after that part of the CNN interview was aired, Harris communications director Lily Adams also went on CNN, saying she didn’t think it was a personal attack and that presidential debates should include active discussions on candidates’ past actions as well as visions for the future.”She started off her comments in the debate by saying and affirming that she doesn’t believe that the vice president is racist and she’s always had respect for the vice president,” Adams said. “I can’t speak to why he was or wasn’t prepared. That’s for him and his team to decide and explain. What she was pointing out was a very real disagreement on the record. These are on decisions and actions that he made. This is what a presidential debate is. It’s to decide who has the record, who has the ideas, who has the vision to lead the party against this — against Donald Trump.”The full interview with “The Breakfast Club” will air Friday at 7 a.m. in which Harris discusses her relationship with Beau Biden, Rep. Alexandria Ocasio-Cortez and House Speaker Nancy Pelosi.

Beck Bennett, Lauren Holt out at ‘SNL’, Aristotle Athari, James Austin Johnson and Sarah Sherman added to cast
After quitting the fashion industry, supermodel Halima Aden is back — this time, on her own terms
6-year-old boy follows mom’s instruction to leave mask on at school, wears it in school photo
Drugging allegations at Northwestern frat houses spark protests
Biden gets COVID-19 booster shot before cameras, pushes vaccinations
Legacy and landscape at stake for Pelosi, Biden: The Note