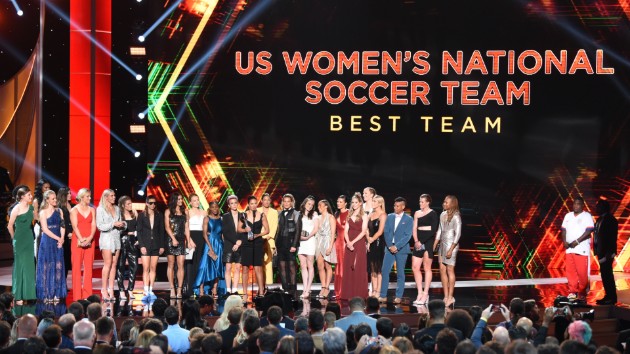 (LOS ANGELES) — The U.S. women’s national team scored a goal yet again, this time at the 2019 ESPYS.Hours after being celebrated with a ticker-tape parade in New York City on Wednesday, the team was in Los Angeles for the award show.They arrived shortly after the start of the program and quickly their impact was felt, as Alex Morgan took home the trophy for best female athlete.”This was probably the second best trophy we won this week,” Morgan joked.She congratulated the other “powerful” women in her category.She then gave a shout out to her teammates, yelling, “We did it!””I love you guys like sisters and I have 22 best friends,” she added.”Investment in women and girls should not only occur on fields,” Morgan added, saying it should happen in all aspects of life and in the professional world. “We are more than just athletes!”Later in the night, the final award for best team went to the women’s national team.Sandra Bullock announced the win by saying, “All those in favor of equal pay, say ‘Aye."”The entire team took the podium, capping off a full day of celebrating their glory.After the co-captains said how proud they were of all the “22 fabulous ladies,” Morgan said, “Let’s pay these ladies and goodnight.”As previously mentioned, the champs were in New York earlier in the day relishing their victory, but calling once again for equal pay among both women and men in soccer.During the parade, some of the players on the World Cup winning team were seen holding a handmade poster reading, “Parades are cool, equal pay is cooler.”Even New York City Mayor and 2020 presidential candidate Bill de Blasio and his wife Chirlane McCray led chants of “U.S.A., equal pay!””Equality of women must be guaranteed in this nation and let’s honor them by doing it. Let’s honor them by showing it,” de Blasio said.Co-captain Megan Rapinoe called on everyone — who “agrees and doesn’t agree” — to “step outside of yourselves, be more, be better,” and “make your community better.””This is my charge to everyone: we have to be better,” she said. “We have to love more, hate less. We gotta listen more and talk less. We gotta know that this is everybody’s responsibility.”

Statue of Bitcoin founder honors mysterious ‘god’ of cryptocurrency
COVID-19 live updates: More than 10,000 new deaths reported in US in one week
Tyra Banks defends Olivia Jade ahead of her ‘Dancing with the Stars’ debut: “Olivia is so brave”
More than 600,000 flags on National Mall stand witness to America’s COVID dead
Murdaugh murders and mysteries timeline: Key events in the South Carolina family’s scandals and deaths
Mississippi health officials warn some pregnant women have been denied COVID vaccine despite ongoing surge