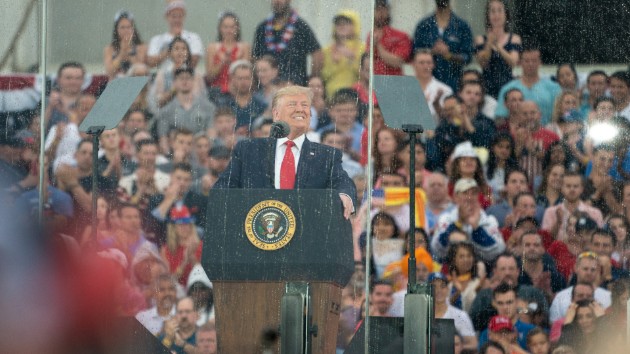 (WASHINGTON) — Washington, D.C., Mayor Muriel Bowser wrote a letter to President Donald Trump indicating that his July Fourth extravaganza at the Lincoln Memorial has contributed to dangerously depleting a city fund used to provide security at special events like rallies and state funerals and that she’d like the city to be fully reimbursed.Bowser said that the president’s event, in combination with additional demonstrations around the holiday, cost the city $1.7 million.”We ask for your help with ensuring the residents of the District of Columbia are not asked to cover millions of dollars of federal expenses and are able to maintain our high standards of protection for federal events,” Bowser wrote.The depleted account, known as the Emergency Planning and Security Fund, is forecast to have a $6 million deficit by the end of the fiscal year, Bowser wrote.”It is critical that the EPSD is fully reimbursed for these funds to ensure the District can uphold proper security and support during the remainder of the fiscal year without incurring a deficit for federal activities,” Bowser wrote.Bowser also wrote that the city has not been fully reimbursed for the $7.3 million in security costs associated with the president’s inauguration in 2017.While the president’s Fourth of July event contributed to the account’s depletion, Bowser also cited underfunding by Congress and other unplanned major events, such as former President George H.W. Bush’s funeral, that have contributed to the fund’s depletion.”President Trump led our Nation in a great Salute to America and recognized the brave sacrifice our service men and women have made throughout history,” White House spokesman Judd Deere said in a statement to ABC News. “We have received the letter and will respond in a timely manner.”The president has said that he plans to hold a similar event next July Fourth.”It was something really special. And I will say this: It was a wonderful day for all Americans. And based on its tremendous success, we’re just making the decision — and I can think we can say we’ve made the decision — to do it again next year, and, maybe we can say, for the foreseeable future,” Trump said Monday.In addition to the costs incurred by the city, the Interior Department and National Park Service spent $2.45 million on the president’s “Salute to America,” while the Pentagon estimated that the military spent $1.2 million — bringing the total estimated known cost for the event to $5.35 million. Copyright © 2019, ABC Radio. All rights reserved.