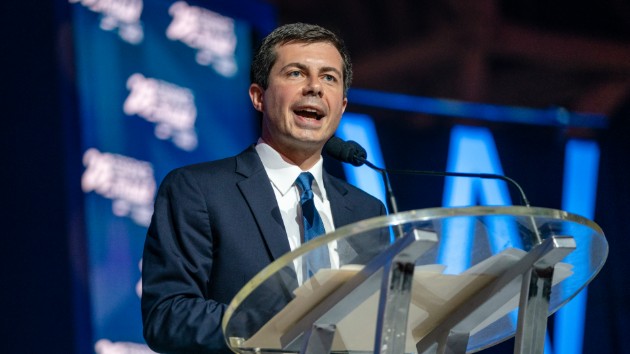 (WASHINGTON) — Struggling to gain support from the African American community early in Democratic presidential primaries, Pete Buttigieg has unveiled a full-scale policy plan aimed at uplifting and supporting black Americans.The South Bend, Indiana, mayor on Thursday released the details of his Douglass Plan, a method for the federal government to “intentionally dismantle racist structures and systems.”The plan focuses on several areas: health care, education, criminal justice, housing and voting rights. It also lists some familiar positions from the mayor, including the legalization of marijuana, abolishing federal prisons, eliminating the Electoral College and making Washington, D.C., the 51st state.”The Douglass Plan will help heal our deep racial divides with bold policies that match the scale of the crises we face today,” Buttigieg said in the release. “We have lived in the shadow of systemic racism for too long. We’ve seen a rise in white nationalism, an economic gap between Black and white workers that grows instead of shrinks, and worse health outcomes for Black Americans, particularly new mothers, that should make us all wonder how the richest country on earth can allow this to happen under our noses.”Buttigieg’s plan calls for implementing a health care policy grounded in anti-racism by creating a “National Health Equity Strategy” to focus on black Americans in health systems. A training system also would be put in place to combat racial bias in medical treatments.The Douglass Plan proposes an increase in federal resources for students at Title I schools that would support supplemental services for low-income students and raise teacher pay. The mayor also intends to implement new regulations to diversify the teaching profession.Buttigieg also addressed higher education. He wants to make public college tuition free for low-income students and increase dedicated resources for Historically Black Colleges and Universities by $25 billion.To bridge the racial wealth gap in the U.S., Buttigieg is pledging to award 25% of federal contracting to small business owners from underserved communities, including minority and women-owned firms. He’s creating the Walker-Lewis Initiative in the hopes of tripling the number of entrepreneurs from underrepresented backgrounds within a decade, and creating three million new jobs in minority communities.Buttigieg is proposing a 21st Century Voting Rights Act in his plan, aiming to end voter suppression and expand access to voting rights, including restoring those rights to all formerly incarcerated people immediately after they’re released.Criminal justice is a big focus of the plan as well, with Buttigieg intending to decrease the incarceration rate at both the state and federal level by 50%, and eliminate incarcerations for drug possession or a failure to pay legal fees, while retroactively reducing sentences for other drug offenses.The full plan is a follow-up to a preview he published in a Charleston Chronicle op-ed on June 11, but the mayor was sidelined from promoting it in the following days after a black man, Eric Logan, was shot and killed by a white police officer, Sgt. Ryan O’Neil, in South Bend on June 16.O’Neil alleges that Logan had a knife. The officer was wearing a body camera during the incident, but did not activate it. A special prosecutor has been appointed to decide if charges against O’Neil should be filed.Buttigieg abruptly left the campaign trail to monitor the fallout from the shooting in his hometown. In the days and weeks after, Buttigieg was criticized for not doing enough during his tenure as mayor to mend the fragile relationship between police and the local black community.On Monday, Buttigieg briefed the city’s Common Council on his next steps following the shooting. He’s asking for a complete review of the police department, vehicle pursuits, use of force and body cameras.The mayor also acknowledged the lack of diversity on the police force and proposed new initiatives to help recruit young minority residents. Copyright © 2019, ABC Radio. All rights reserved.