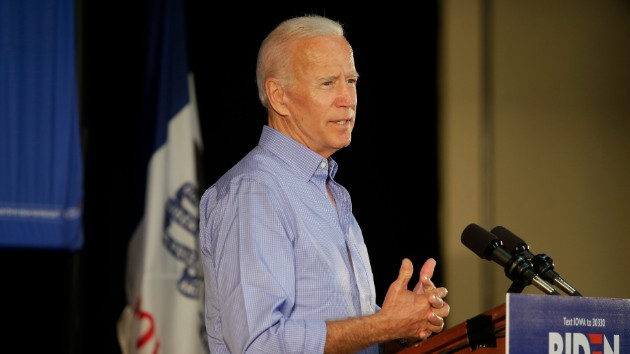 (NEW YORK) — Former Vice President Joe Biden is expected to lay the groundwork of his foreign policy plan during a speech on Thursday afternoon in New York City.Biden is expected to draw sharp contrasts with President Donald Trump, whom he’s often criticized for diminishing the standing of the U.S. on the world stage, and for his cozy relationship with dictators like Russian President Vladimir Putin and North Korean leader Kim Jong Un.”The president’s assault on our own democracy — its institutions, its underlying values — has deeply tarnished our ability to lead by the power of our example and to bring others along,” a senior Biden campaign official said. “There’s probably a greater premium than there’s ever been on working with allies and partners to deal with the greatest threats to the American people and threats that are inescapable.”Biden will face high expectations when it comes to foreign policy, as he’s the 2020 candidate with the most experience abroad.Ahead of the speech, the Biden campaign also released a digital video, “The Trump Doctrine.” The video includes clips of Trump praising Putin and Kim, as well as news reports of the president withdrawing from several international agreements to highlight Trump’s “erratic policies.”

On the trail, Biden often speaks about his foreign policy credentials earned during his time in the Senate and the White House. Biden served as the highest-ranking Democrat on the Senate Foreign Relations Committee for 12 years, and dealt with foreign policy during his eight years serving as vice president to Barack Obama.”The purpose of our foreign policy is to defend and advance the security of our people, their prosperity, and the democratic values that define the United States. Those are the North Stars that a Biden foreign policy would look to,” the Biden campaign official said.Biden’s speech will focus on three main pillars: “Repairing and reinvigorating” U.S. democracy, while strengthening democracies around the world; helping the middle class succeed in a global economy with a “foreign policy for the middle class”; and taking a leadership role to coordinate global action on global threats unique to this century, including climate change, mass migration and nuclear threats.In the speech, Biden is expected to discuss the Iran nuclear deal, tensions with Russia and North Korea, and the Paris climate accord.The senior adviser said that Biden, who’s often touted his work alongside Obama during the campaign, would not simply return to the foreign policy of the previous administration, but use it as a starting point, saying that the U.S. and allies would have to build upon and go further than previous agreements.”It’s not enough to go back to [the] Paris [climate accord], as important as that is,” the senior campaign official said. “[Biden] would, but he would then build on it in very substantial ways to get other countries to actually increase their own commitments.”When asked about the Iran nuclear agreement, the senior campaign official said that Biden would return to the agreement made during the Obama-Biden administration — but with conditions.”If Iran returns to compliance with the deal, so should the United States and then it should work with its allies and partners to build on the deal, to strengthen it, to lengthen it going forward. But Iran would have to first come back into compliance,” Biden’s senior adviser said.The official spoke in broad terms about Biden’s policy specifics but did preview one key portion of the candidate’s plan, saying in his first year in office Biden would convene a summit of democracies from around the world to “strengthen our common resilience and to work more effectively together.”Biden also would challenge private businesses to engage in the discussion, and charge tech and social media companies to “make their own commitments to make our democracy more resilient, and also to deal with the way technology is being abused in other countries — for surveillance states facilitating repression and censorship, spreading hate, spurring people to violence,” the official added.Copyright © 2019, ABC Radio. All rights reserved.